Saved Searches Advanced Search
In observance of Thanksgiving, Curbside Services and our Customer Care will not be available from Thursday, November 26 - Saturday, November 28.
Thank you for your support and patience as we continue to evaluate and adjust our operations due to COVID-19. Currently, all of our library buildings are open for Curbside Services (Walk-up & Appointment). You can also use our new methods to get in touch with us. 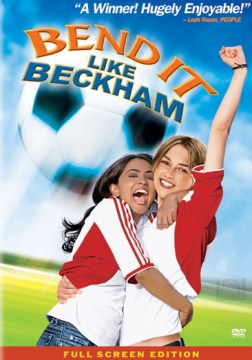 This was a pretty good show. This show was all about stereotypes. It demonstrated differences between cultures. Even though it was pretty predictable it was still a decent show.

Well-told tale of an Indian girl, born in England, who's a gifted soccer player and is faced with lying to her conservative family to play soccer (in the U.K., called football) and go against the expectation that she'll simply marry and have kids. Uplifting and dispels stereotypes about women's ability to play soccer (this was filmed back in 2002, before the meteoric rise of the U.S. women's soccer champions and other countries also creating female soccer pipelines.

A fun and inspiring movie for young women who love soccer. The movie also does an excellent job of highlighting the role of culture and gender in society.

a great movie I loved it since i first saw it on cable tv a few years ago and then I bought a copy for home. a great movie to watch with the family . it is great fun as a film.the movie is about parents and family trying to hold back there children from there dreams cause they are scared of the outside world but they can't in the end .and the movie also shows what kids go through growing up dealing with other cultures etc ! I reccomend this movie!

I loved this movie when it first came out and it's still so much fun to watch.

someone in my family requested this movie. the weird cover and title was only the beginning. the movie was a big waste of my time

I didn't like this show. I just thought it was plain crude.

A really fantasic movie - it's great for the whole family.

Worth the watch. I really enjoyed it.

A really cliche film topped with cheese. It has some oddly awkward parts in it...in fact, too many...really disliked it as did the other 50 people I saw it with on a trip.

Predictable, and light fare, but fun, and definitely worth the watch.

A different take on the traditional quirky small-town British light comedy but still with elements of what makes these types of films so generally enjoyable by a great range of filmgoers - eccentric characters and global issues on a community level - in this case Punjab Brits concerned their daughter is rejecting her expected role in life.

My husband loves this movie for the Indian cultural experience!

A nice tale of two cultures coming together. An interesting look into an other cultures' expectations with a young adult perspective.