Saved Searches Advanced Search
Thank you for your support and patience as we continue to evaluate and adjust our operations due to COVID-19. Currently, all of our library buildings are open for Curbside Services (Walk-up & Appointment). You can also use our new methods to get in touch with us. 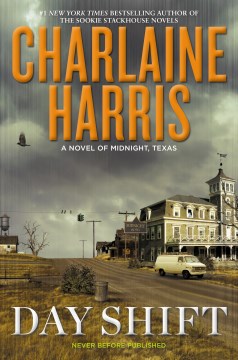 Fun and cute! I read the whole series and enjoyed it.

This is the second segment into the lives of the town Midnight, Texas. All the main characters are back with a new development surrounding the Rev and introducing Diederik. It was tremendously fast paced, exciting as the first one, with old mysteries solved and new ones emerging. This is being added to my favourites lists for sure.

I thought the storyline was fun and the mystery part not what I had thought. (which is great for a mystery) I'm glad I had read the Sookie series first too as was fun to see some of those characters her as well. I am looking forward to the next then no clue what to read...suggestions? (just finished the 30 books od the Dark series by Christine Feehan too)

I love these characters but I didn't find the plot very gripping. It was simple and predictable. If you are looking for something quick and fun, this would be a good choice.

I love the mystery in the story and how all of the characters have secrets. Can't wait to read the next book.

I practically inhaled this! Read it in one sitting because there was no place to pause! Some quick visits from characters in the Sookie series made it even more fun. The invasion of Midnight was as offensive to me as it was to the characters! Some great reveals in this installment. Midnight, Texas fans will not be disappointed.

The second is just as good as the first, am reading the third book now, so far so good.

I don't know why I like this book. Something about the setting and the slightly weird characters make this story oddly entertaining.

I really enjoy this town of characters. Looking forward to the next one in the series.

After reading Midnight Crossroads, I knew I had to read this second book in this series. I was not disappointed from the beginning of the book to the end. I hope there will be more books in this series to come.

The more I read this series, the more I seem to fall in love with its characters. Mind you, it’s only the second book of the series, but Day Shift has revealed a lot of background information about the citizens of Midnight, Texas. The more I think about it, the more I realize the series hasn’t really settled with a main character. At least, not yet. It’s almost as if the main character is the town, and its citizens are simply supporting the stories it’s hosting.

To be quite honest, Day Shift wasn’t very thrilling nor was it very engaging. I liked the book enough because I really enjoy the characters, but when it comes to the story, it’s a little bit disappointing. The story really begins when Manfred is in Dallas for a working weekend in a hotel, where he plans to meet up with clients and do personal psychic readings. However, the night before he’s set to start working, he notices another Midnight, Texas resident, Olivia, dining in the same hotel restaurant. He thinks little of it until the next morning when Olivia’s dining companions are found dead in their hotel room. And things get even more complicated when Manfred’s own client dies in the middle of the reading. The timing and the circumstances are bad for Manfred’s business, especially when he is accused of murdering and stealing from his client.

As suspicions are raised, Manfred is the main focus of the murder investigation and reporters camp out in front of his house in Midnight. Along with the newly renovated and grand reopening of the Midnight Hotel, the town is getting more attention than the residents are used to. The people of Midnight like the fact that their little town is quiet and doesn’t get many visitors, and all the action is making some of the residents anxious and unhappy about the unwanted publicity. Manfred and Olivia join together and decide to solve the murder, in order to get rid of the unwanted attention as soon as possible. The more they investigate, the more things get complicated and troublesome.

The main story and mystery surrounds Manfred but the other residents of the town also have their own problems to deal with. The town Reverend, simply referred to as Rev, is charged with the care of a growing boy; Joe finds himself in a situation where the only way to survive is to do something he promised long ago he wouldn’t do; Olivia deals with her past and we learn more about who she is, and what she does for a living.

We also meet a few new characters who are living temporarily in the Midnight Hotel. One of these characters is actually linked to Sookie Stackhouse, the main character of Charlaine Harris’ other bestselling series. With this link, we confirm our suspicions that this series is based in the same universe as the Sookie Stackhouse books. I highly doubt the author will push this link any further but it’s good to know that things may get even more supernatural. Like Bon Temps, Midnight is a special town that seems to attract the supernatural, but the why of this has yet to be investigated.

Overall, I was a little bit disappointed with the main mystery but the various side stories add excitement to the book. For someone that hasn’t finished Charlaine Harris’ other series, I’m actually quite invested in this new one. I’m really looking forward to reading more about Midnight and its mysterious residents. Who wouldn’t be attracted to a town with a witch, a vampire, a psychic, a shape-shifter, a talking cat and angels?

I enjoyed this, and it was good to find some familiar characters from Bon Temps. A lot is revealed in this, book 2 of the series, and it is all set up for another long and successful series like True Blood. Enjoy!

I love Charlaine's new series, of which this title is book 2. The characters are very strange, but very real in the way they are depicted. A very entertaining read, and I look forward to the next one.

Fun fun fun! If you liked "True Blood", you'll love this series too!