Saved Searches Advanced Search
Thank you for your support and patience as we continue to evaluate and adjust our operations due to COVID-19! Currently, all of our library buildings are closed. However, we’re still here to support you!  Our Libraries now offer Curbside Pickup. Learn more about our innovative online services, or reach out via our new methods to get in touch with us. 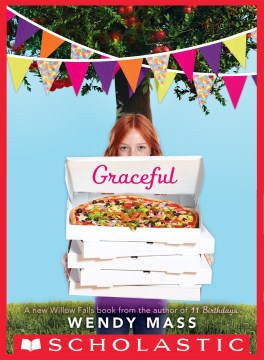 Such a good book. I think that all of us really need to get Wendy mass's email address and demand another book. Hey, it worked last time. If you agree with me like this comment.

This book is amazing. Like it said in some other reviews, Wendy Mass intended to make The Last Present , the last book of the series but all her fans knew that it wasn't the right book to become a great ending to this wonderful series. So she whipped up this book, (Thank Goodness) and ended the series in such a magnificent way. This book is a book that shows how much the characters have grown and will grow since their first encounter with Angelina D'Angelo. Of course there will be no spoilers here but if you have read the last books, you may understand that in this book , Grace will do something that no one has ever done with some help from her friends. So thats it. This amazing emotion filled book will probably be the best book you have so far ever read in your life.Thanks go to Wendy Mass for writing such an amazing book.

With “The Last Present” being the original ending for the Willow Falls series, the publishing of “Graceful” was quite a wonderful surprise. It wasn’t right to end it at just that, so Wendy Mass came out with a stunningly beautiful and emotion filled novel to wrap up the series. And she was right to do so, “Graceful” became one of my favourite non-cliche magical novels ever to be read, as I’m sure it was for many others. I’m not going to spoil too much, but let’s just say that it was unique apart from the previous books in the Willow Falls series and certainly had some interesting twists to it. @WordfulReviews of the Teen Review Board at the Hamilton Public Library

As a Wendy Mass enthusiast, I was more than pleased with how she decided to end off the Willow Falls series after the publishing of 4 extremely well-written books. While reading “Graceful”, I got the chance to see how far the characters have developed, which I’d say is one of Wendy Mass’s greatest strengths as an author. The amount of thought and effort that has been put into ending off this series is clearly visible in the constantly thickening, suspenseful plot, descriptive words, and carefully planned out details. Although “Graceful”, along with the other Willow Falls books, is fictional, it’s still incredibly relatable on a much broader social/personal level beyond the norm. Putting their magic-like powers aside, not only are these characters the same age of the vast majority of readers which makes it easier to feel closer to them, but it becomes incredibly easy to form personal connections as the reader most likely feels like they’re in the same position as the characters due to their age-appropriate personalities and feelings. For instance, Tara’s family kept moving from one area to another to avoid Angelina D’Angelo, making it difficult for Tara to settle and form long-term friendships. Overall, I absolutely enjoyed reading the last book of the Willow Falls series and if you’ve read the latest novel of this series, this book would also be appealing to you as it would be a great way to end off the read. Rating: 4/5
- @BiggerPictureReviews of the Teen Review Board of the Hamilton Public Library

BEST BOOK EVER and BEST SERIES EVER

I love this series! There are so many mysteries and puzzles that the characters have to solve. I like how this book mixes fantasy and reality. The characters are easy to personalize with and get to know. I would recommend this book to others!

A story about a girl with a big responsibility

If you haven't read this series you are missing out! I love it!
In case you don't know the order of the series it goes 11birthdays, finally, 13 gifts, the last present, graceful.
Wendy Mass is a great author!
So many secrets and fun, surprising things are unraveled in this last book! You get so attached to the characters.

Great Book! This book is one of my favourites!