Saved Searches Advanced Search
We’re pleased to welcome you back to the library with modified in-library services, Express Service, beginning Thursday, April 22. Express Service will be available at all our library communities Thursdays through Saturdays from 10:00 AM-1:00 PM and 2:00-5:00 PM. For more information about Express Service participating locations and updated Curbside Services hours, visit smcl.org/express. 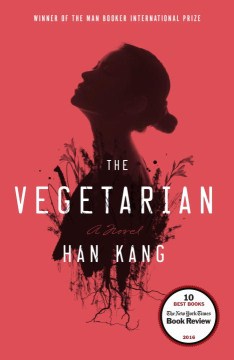 I finished this book in one sitting. While this book may seem short, Kang's writing is effective, elegant in its bare-bones sentences and delivers so many emotions. I admire writers who can deliver much without being superfluous. Her characters (especially the two sisters) are relatable and you wanted to root for them. This is not just a horror, it is also a criticism of South Korean patriarchy. This is a book that haunts me long after I put it down.

This book was haunting for so many reasons. It was one of those books where you feel off for the entirety. One of the many amazing feats by Kang in this work is creating a medium for so much allegory. This does not have to just be about dietary choices. The elegance of the endeavor is beautiful and the story alone is engaging and driving.

This was a horrifying descent down a very dark road.

I listened to the audiobook, which was pretty well done. A sort of three-section literary exploration of slow-burn body horror. Of course there's much more to it than that.

An impressive exploration of violence, free will, and bodily autonomy.

Engaging and well written, but definitely a tough read emotionally. I read the white book shortly after this and they pair nicely together.

Horror and literary fiction fans will conjoin with "The Vegetarian". This dark little book explores what would happen if one day you decided to not eat meat as a Korean person. Horror fans will soak up all the terrifying things that one woman's family will do to make her eat meat again, while Literary fans will love the critical, Sylvia Plath-style writing.

Haunting and poetic, this Korean psychological thriller builds on themes of isolation, violence, and control to construct a compelling story in three parts. This book is not for the faint of heart; the author delves deep into people's reactions to one woman's decision to take control over one small aspect of her life. The more they push against her, the deeper she pulls into her convictions and her own mind.

The Vegetarian is a dark, yet beautifully written book about a woman's decline into mental illness.

You feel such pity for its protagonist, seeing how she simply withdraws from life. You hope the best for her, yet are left feeling helpless as she sinks deeper into despair.

Bloody nightmares convince Yeong-hye to give up meat. This act has repercussions for the entire extended family.

I thought the nuances of Book One were well done.
I felt interface of the brother-in-law's artistic drive and his life was too artificial. It lacked the reality of either perversion or artistic drive. If it was the combination that created a uniqueness, then it wan't convincing.
The third book almost returned to the quality of Book One. The character of the shop owner caring for her mentally disturbed sister in the mentally disturbed medical environment was, well disturbing, and well done.

This is the first of hopefully more translated works of Korean author Han Kang. It is a disquieting work that traces how one person's change can affect others in a family. The publisher's blurb describes the setup situation quite well, but doesn't, of course, give many hints of the superbly understated narrative flow and the following impacts. Translator's often play the key role in how a novel originally in a foreign language comes across. It is a delicate task in that some Korean terms do not translate well. I assume the translator bases many decisions on how they perceive the writer's intent and makes decisions based on that perception. The translation here by Deborah Smith is hopefully accurate in that the writing is often terse, yet when you put the sentences together a mood, an interior atmosphere, comes successfully across. Also there is a rawness to some scenes that makes them more deeply felt by the reader. The three sections of the novel are from the perspectives of the husband of the vegetarian, the brother-in-law, and the sister. I'll leave it to the reader to decide what negative degree all three were affected by the vegetarian. I do feel that there are some things I don't quite get that the author intended. The book did raise some self examination as to my views on women and femininity, yet I'm still haunted about what else I should have metaphorically tuned in on. I'm putting it on my To Read Again stack for reconsideration a year or so down the road. For me it was time well spent, it challenged my perspectives as a very good novel should, and I look forward to more of Kang's work appearing in English translation.

Provocative and captivating. Weird book but I couldn't seem to put it down.

Um... Have you ever read a book that just left you feeling like you just didn't get it... that you must be less intelligent than you thought? Yes. This one.

A strangely beautiful book that explores taboos and social rebellion. Quiet yet powerful and filled with violence and eroticism, this book isn't for everyone. If you're looking for a unique read unlike anything you've seen before, this may be it.

Beaten in childhood by her father, married off to a self-centred man of no ambition, expected to be the model of a quiet, compliant wife, the repressed woman at the centre of The Vegetarian is a non-entity, representative of the role of women in Korean society. Her story is told in three parts: by her husband in first person, by her artist brother-in-law, and finally by her older sister who all address the woman’s transformation in accordance with their own needs. The meaning of the book does not become clear until the very end. Rich in metaphor, plant imagery as rebellion and rebirth, and sensual eroticism, this book is not for everyone.

I thought this was a wonderful story about mental illness and the marginalization of the two main women in the novel. The first two parts are wonderful for setting the stage, and the last third did drag a bit for me, but was important to tell the story of how mental illness affects people differently. A great look at how those with mental illness are treated by those surrounding them, and I found it very compelling that we only hear from "the vegetarian" once or twice, and then she is silenced throughout the rest of the novel, only to be looked at through the eyes of others and never to be fully understood.

Yeong-Hye starts out as a totally unremarkable young woman, described by her husband in such as way that we know she is unmemorable in personality and appearance. He likes it that way. He doesn't have to bother with considering her; he just knows that she will keep quiet, do as she's told, and keep his life orderly and predictable.

Then she has a disturbing dream and decides to become vegetarian. This alarms her husband and extended family. They believe her being vegetarian will damage her and them, and their place in society.

I do not see The Vegetarian as a comment on mental illness, at least not Yeong-Hye's. I see it as allegorical. Her dream opens her eyes to the cruelty and repression one group visits upon another to satisfy their own desires and expectations. She counteracts what she sees as cruelty with her own behavior, i.e. becoming vegetarian. To her husband and family, this is unacceptable. They refuse to allow her this freedom to make her own decision and govern her own behavior, even going so far as to force meat into her mouth. Instead of acquiescing, she takes it a step further and begins refusing to eat, and the hospital feeds her intravenously. She begins feeling herself more attuned to plants than to humans, and in fact begins "becoming" a tree, standing on her hands in the hospital in imitation of the way she believes trees stand -- with their arms in the ground.

Han's writing is spare and serene, qualities which add to the mystical feeling of this book. This conceit -- of woman as a plant, alive but not sentient -- is a new one for me, and very interesting. It brings to mind Daphne who begs to be turned into a tree to escape the unwanted advances of Apollo who is chasing her. I am now interested in reading Han's "The Fruit of My Woman," about a woman who lives as a potted plant, with her husband tending her.

Reading advance press I expected a horror story about "going veggie". Which may be how some interpret this though what it really depicts is mental illness. I suspect I'll be remembering this book for a long while.

The first third is profoundly interesting in this regard: How can not eating meat be so controversial? I stopped eating meat back in the 1970's (albeit, in America) and it wasn't even controversial at that time. Koreans must hold very different beliefs.

The second third is profoundly interesting and provocative. I was very caught up in it and found it very believable.

The final third was the weakest but it felt a necessary end to the saga; a sad end for a profoundly mentally ill woman whose circumstances couldn't possibly have been helped by her exploitation in the middle third of the book.

This one is an interesting and quick read. Give it a whirl.

This short novel is memorable. The novel tell a story of characters that are not your "normal" neighbors. On the other hand, when reading the second part of this 3 part novel, the plot/theme of painting the woman body strongly reminder me of Tanizaki's novel about the same topic. I am not sure any other reader have the same conclusion, but this theme is not that original and Han kang might read the same Tanizaki's novel.

This is a book which can make you want to smack the writer and ask what is wrong with him and the world he lives in.

Three connected stories based around one of the characters refusal to eat meat and her eventual descent into mental illness. The images created by this story are beautiful and often shocking.

What happens when people let go of control? Interesting, odd, dark, and beautiful.