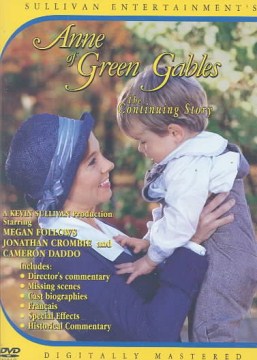 Canadian classic! Loved it. Hadn't seen it for ten years. Megan was such a young girl and Colleen Dewhurst and Richard Farnsworth are absolute treasures. You have to see it at least once! ❤️🇨🇦

I`ve always loved all 3 Anne movies done by Kevin Sullivan with Megan Follows & Johnathon Crombie.However I alway`s wished that the story could`ve continued like in the last 2 L.M. Montgomery books & that it could`ve been shown on the screen-Anne & Gilbert raising their children instead of just ending at the end of W.W.1.

This is the first movie, wonderfully produced, very true to the original books. It is far far better than the later, abridged, shallow U.S. produced versions.

The surprisingly dramatic third entry in the Anne television series. Although the film departs from the world of L.M. Montgomery, I still enjoyed watching Anne and Gilbert as they find their way in the world amidst the Great War. It deals with some hard topics, with some fairly realistic depictions of war violence - so be cautious about showing to young children - but the story ends (as Anne stories always do) with a sense of optimism, hope, and love.

This movie is absolutely riveting. A true blessing and flower if I may say! My love goes out to all the fans of anne and her bosom friends!

One of my favorite moments between orphan Anne Shirley and her adopted father Matthew Cuthbert: "I never wanted a boy. I only wanted you from the first day. Don't ever change. I love my little girl. I'm so proud of my little girl."

This is a great movie

There are no "seasons", only two original films, Anne of Green Gables and Anne of Avonlea, titles, as well, of the first two books in a series of nine written about the title character, by author Lucy Maud Montgomery. I believe there is also a third film, made in 2000, which tells the continuation of the Anne story.

Please can someone tell me that this is the first season I’m so confused why does it not say the seasons?

I love Anne of green gables! And I think I like the first part and the continuing story better. The ending was perfect and I was so happy when they decided to raise the baby.

violet_panda_2900 thinks this title is suitable for 9 years and over

violet_panda_2900 thinks this title is suitable for All Ages

blue_owl_1293 thinks this title is suitable for 13 years and over

aewild thinks this title is suitable for All Ages

Kittenbay thinks this title is suitable for 9 years and over

tamgreat2u65 thinks this title is suitable for All Ages

tamgreat2u65 thinks this title is suitable for All Ages

tejamarie02 thinks this title is suitable for 13 years and over

Olivia__h thinks this title is suitable for All Ages

yoandra thinks this title is suitable for 6 years and over

"I don't want diamond sunbursts, or marble halls. I just want you." - Anne

My life is a perfect graveyard of buried hopes. That's a sentence I read once and I say it over to comfort myself in these times that try the soul.

Gilbert: It will be 3 years till I finish medical school. Even then there wont be any diamond sunbursts of marble halls

*On a train back to green gables after the war is done . Gil talking to Anne*

Gilbert: You know every day, I'd pick a different memory I had of you, and play it over and over in my mind till every hair, every smile... and every freckle was just as I remembered

Anne, after a hug fight with Gilbert, "I think I would like to be a nun."

I think you may be a kindred spirit after all.

Tommorow is always fresh, with no mistakes in it.

The film resumes the story of Anne Shirley, who at 16 had chosen to study for her college degree by correspondence in order to remain at Green Gables to help an aging Marilla, who has eyesight problems, look after the house and farm. Anne now holds a Teacher's Licence after completing the two-year post-secondary course at Charlottetown's Queens Academy in only one year.

Anne begins to teach at Avonlea School and has dreams of becoming a writer, but her story "Averil’s Atonement" is rejected by a magazine. Leaving the post office one day, Anne runs into Gilbert Blythe, who tells her that her best friend Diana Barry is engaged to Fred Wright. Anne is initially bewildered by Diana’s decision, calling it impulsive. Meanwhile, in the last two years, Marilla’s eyesight has greatly improved. Having regained her independence, Marilla encourages Anne to resume her old ambition of attending college.

At the clambake celebrating Fred and Diana’s engagement, Anne and Gilbert wander off to a bridge, where Gilbert proposes. Anne rejects his offer, convinced that their marriage would be unhappy and unsuccessful. She runs off.

At Diana’s wedding, Anne sees Gilbert with a young woman named Christine Stuart. Gilbert tells Anne that he and Christine are just friends, then offers to wait for her if there is any hope of them getting together. Anne rejects him again, and Gilbert suspects that there is someone else, despite Anne's assertion there is no person she cares about more than him. Anne returns to Green Gables and decides to look into the job her former teacher Miss Muriel Stacey offered her. Eventually, Anne decides to take this job as an English teacher at Kingsport, Nova Scotia Ladies’ College in the hope that it will inspire her and give her something to write about.

Initially, Anne finds her new job to be difficult. A member of the local community — and member of the powerful Pringle family — had also tried for Anne’s post and was rejected, causing resentment. However, Anne gradually earns the respect of her students, their families and her colleagues, including the severe and critical Katherine Brooke and the Pringle family. Anne organizes a play to raise money for the college, which is greatly appreciated. Her dream of being published is also finally achieved after she writes a series of short stories based on Avonlea inspired by a suggestion from Gilbert. While teaching at the Ladies' College, Anne grows close to one student, Emmeline Harris, at whose house she is boarding along with the stern, controlling grandmother Harris and her repressed daughter Pauline who is a virtual prisoner in the house. Anne is able to convince the grandmother, a hypochondriac, to leave the house and go to a community picnic, and to let Pauline attend a friend's wedding overnight in another town, where she strikes up a romance. Emmeline's widowed father Morgan Harris, a well-to-do traveling businessman, also proposes marriage to Anne, after Anne and Emmeline had visited his spacious house in Boston. Anne also succeeds in getting the spinster teacher Katherine Brooke to spend a badly-needed summer vacation at Avonlea, where she opens up her feelings to Anne.

Anne declines Morgan Harris' proposal and returns to Green Gables, where she learns that Gilbert is ill nearby with scarlet fever, having returned home from Halifax Medical School. Anne finally realizes her true feelings for Gilbert, and goes to visit him. After Gilbert regains his health, he proposes once more, and Anne accepts him with a kiss, declaring, "I don't want diamond sunbursts, or marble halls. I just want you."

11 year old orphan Anne Shirley is living in servitude with the cruel Hammond Family in Nova Scotia. However, when Mr. Hammond dies, Anne is sent to an orphanage where she eventually receives the wonderful news that she has been adopted by a couple on Prince Edward Island. Upon arriving on P.E.I, Anne is met at the train station by the elderly Matthew Cuthbert who is surprised to find a girl there instead of a boy. Matthew and his sister Marilla had requested a boy to help them with the farm chores but he couldn’t very well just leave the girl at the train station. Matthew decides to take Anne to meet Marilla and on the buggy ride home becomes completely smitten with the red-haired orphan girl.

When Anne Shirley arrives at the Cuthbert’s farm called "Green Gables", she is a precocious, romantic child desperate to be loved and highly sensitive about her red hair and homely looks. In her own unique headstrong manner, Anne manages to insult the town gossip, Rachel Lynde, in a dispute over her looks; smash her slate over Gilbert Blythe’s head when he calls her "Carrots" on her first day of school; and accidentally dyes her hair green in an effort to turn her red hair black and salvage her wounded pride.

Marilla Cuthbert is shocked and beside herself to know how she will ever cope with this sensitive, headstrong child so desperate to fit in. But shy, gentle Matthew is always there to defend Anne and hold her up on a pedestal.

It seems like Anne is destined to cultivate disaster. She becomes "bosom" friends with Diana Barry from across the pond and succeeds in getting Diana drunk by accidentally serving Currant Wine instead of Raspberry Cordial at a tea party. Diana’s mother and Rachel Lynde turn on Marilla for making wine in the first place. Hence Anne moves from one mishap to the next as her wild imagination and far-fetched antics combine to constantly bring trouble onto her shoulders.

Anne finds her element in the academic world, ultimately competing neck and neck with Gilbert Blythe who becomes her arch opponent. Anne and Gilbert go on to win the highest academic accolades, constantly vying for honors at every level. Eventually their fierce rivalry turns to a secret affection, which blossoms into love. Marilla tries to prevent Anne from seeing Gilbert because Anne is still quite young and Marilla wants Anne to continue her education. In the end, however, when Matthew dies and forces Marilla into considering selling Green Gables, Gilbert gives Anne his teaching post in nearby Avonlea so she can stay at Green Gables and continue to support Marilla.

Violence: Some scenes of war peril and violence