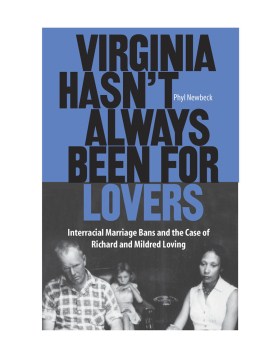 Virginia Hasn't Always Been for Lovers

Interracial Marriage Bans and the Case of Richard and Mildred Loving

This landmark volume chronicles the history of laws banning interracial marriage in the United States with particular emphasis on the case of Richard and Mildred Loving, a white man and a black woman who were convicted by the state of Virginia for the crime of marrying across racial lines in the late 1950s. The Lovings were not activists, but their battle to live together as husband and wife in their home state instigated the 1967 U.S. Supreme Court ruling that antimiscegenation laws were unconstitutional, which ultimately resulted in the overturning of laws against interracial marriage that were still in effect in sixteen states by the late 1960s.

American antimiscegenation laws were first enacted in Maryland in the seventeenth century and continued to the year 2000 with a section of the Alabama Constitution forbidding the state legislature from legitimizing interracial marriage. An increasing number of citizens marry across racial lines today, and there have been radical changes in laws regarding interracial marriage in the past few decades. But even as other landmarks of the civil rights movement have been the subjects of numerous scholarly tomes and personal memoirs, this is the first comprehensive treatment of theLoving case and the only study to tell the Lovings’ story within the full historical context of interracial marriage bans.

In Virginia Hasn’t Always Been for Lovers: Interracial Marriage Bans and the Case of Richard and Mildred Loving, lawyer Phyl Newbeck describes how the laws banning intermarriage came about, how they were perpetuated, and how they were finally struck down. In addition to detailing the story of the courtship, marriage, and arrest of the Lovings, the volume describes the growth of antimiscegenation legislation, the subsequent fight to eliminate racially discriminatory practices, and the litigations that continued years after the Supreme Court had ruled on the issue. With consummate skill, Newbeck looks at a generous and representative sampling of court cases that invalidated marriages and imprisoned couples during the twentieth century, including ones in which inheritance rights were severed and child custody was terminated due to interracial unions. She also discusses three court decisions that quashed antimiscegenation laws in California, Nevada, and Arizona in the mid-twentieth century and the role that activist groups played in these changes.

Drawing on legal research and historical, sociological, and political sources, Newbeck includes quotations from some of the statutes and explanations of why the laws were deemed necessary, covering an impressive amount of the case law pertaining to antimiscegenation statutes from the early convictions to the later challenges. She asserts thatLoving v. Virginia was not just about intermarriage but also about how the country defined people in terms of races. Her findings reveal how the specter of interracial marriage was used to perpetuate segregation, what percentage of blood” was required to place someone in a forbidden group, and what penalties were imposed on the bride, groom, licensor, and clergy.Virginia Hasn’t Always Been for Lovers also examines the relationship of antimiscegenation laws to sexism and paternalism, social activism, family dynamics, and immigration.

Baker & Taylor
Explores the history of the laws banning interracial marriage in the United States, discussing how they came about, how they were perpetuated, and how they were struck down, with an emphasis on the case of Richard and Mildred Loving, a couple convicted for the crime of marrying across racial lines by the state of Virginia in the late 1950s.

Loading...
No similar edition of this title was found at SMCL.

Try searching for Virginia Hasn't Always Been for Lovers to see if SMCL owns related versions of the work.