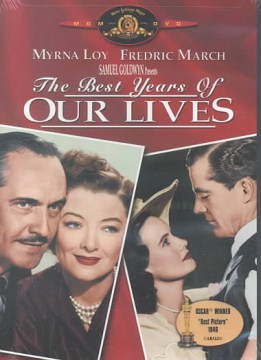 The Best Years of Our Lives

Recounts the problems faced by three returning veterans of WWII as they attempt to pick up the threads of their lives. Captain Derry is returning to a loveless marriage, Sergeant Stephenson is a stranger to a family that's grown up without him, and sailor Parrish is tormented by the loss of his hands.
Publisher: Santa Monica, CA : MGM Home Entertainment [distributor, 2000]
ISBN: 9780792846130
0792846133

Best movie ever made.

Good movie showing the problems some returning WWII veterans had back in the USA.

A true masterpiece, a film with characters with real motives, who change and develop authentically. The performances are all excellent, the writing is realistic, few movies can touch this one. Highly recommended.

When I first viewed this film, I was turned off by what I perceived as a dated one without much substance.

This second time, I saw a film dealing with the problems and issues facing Vets returning from war struggling to move on with their lives. The director did a masterful job with this movie. My remaining reluctance with the film is the typical "happy Hollywood ending". Still it's a very good film.

Hollywood doesn't do realism, but there are certain times, like immediately after WWII, when it comes close. The gloss is still there, but The Best Years of Our Lives is true to the feelings of many returning veterans and their families. Prepare to be surprised, shocked and moved, both by the story and the performances these familiar actors were capable of.

Three hardened veterans return to their small home town and, failing to adjust, tear the place apart. Wait, that’s not what happened. The cast is great: March, Loy, Wright, everybody. There is a subtle implication that the process of readjustment will never be complete. A truly moving film.

This movie stands out from other films of the era concerning WWII, in that it isn't a "happily ever after" view through rose-colored glasses. The three servicemen at the center of the movie all have issues re-entering their civilian lives. The performances of all the cast were memorable, and the bonus is Hoagy Carmichael playing the piano.
I have read a number of comments from others that Harold Russell lost his hands in combat. Not so. He was handling a grenade with a faulty fuse during training, when it exploded. His performance was excellent, on a par with the professional actors around him.
I first saw this movie in the 1980s, and wondered how I had missed it prior to then. Having grown up on WWII movies, my own experiences returning from Vietnam were unlike those portrayed in other movies of the 40s and 50s. This film was a revelation to me.

This is a 1946 love story directed by William Wyler.
Although three veterans are having their own deep-seated problems, it is an emotionally engaging drama with a heartwarming end.

Three servicemen have a rough time adjusting to civilian when WWII is ended. One of them, Homer, played by Harold Russell, comes home without any hands. I was surprised to find that Russell was an actual serviceman who had lost his hands in the war. The makers of the film were criticized for using an actual wounded warrior as being some kind of exploitation (or was he just a reminder of how we fail to toss away the wounded warriors when they are no longer useful in war?). The film won 7 Oscars and Roger Ebert lists this as a Great Movie. The film is somewhat marred by the fact that every 50 minutes an African-American pops up among the White crowds for several seconds to remind White America that Blacks are just throwaway subhumans.

Butch Engle (to a frustrated Homer Parrish): "...Give 'em time, kid -- they'll catch on. You know your folks'll get used to you, and you'll get used to them. Then everything'll settle down nicely. Unless we have another war. Then none of us have to worry because we'll all be blown to bits the first day. So cheer up, huh?"

Al Stephenson (justifying a bank loan he approved to a customer with no collateral to his boss): "...You see, Mr. Milton, in the Army I've had to be with men when they were stripped of everything in the way of property except what they carried around with them and inside them. I saw them being tested. Now some of them stood up to it, and some didn't. But you got so you could tell which ones you could count on. I tell you this man Novak is okay. His 'collateral' is in his hands, in his heart and his guts. It's in his right as a citizen."

Homer Parrish (showing Wilma how he prepares for bed by removing his prosthetics and wiggling into his pajama top): "...I'm lucky. I have my elbows. Some of the boys don't. But I can't button them up." Wilma Cameron: "I'll do that, Homer." Homer Parrish: "This is when I know I'm helpless. My hands are down there on the bed. I can't put them on again without calling to somebody for help. I can't smoke a cigarette or read a book. If that door should blow shut, I can't open it and get out of this room. I'm as dependent as a baby that doesn't know how to get anything except to cry for it. Well, now you know, Wilma. Now you have an idea of what it is. I guess you don't know what to say. It's alright. Go on home. Go away like your family said." Wilma Cameron: "I know what to say, Homer. I love you and I'm never going to leave you... never." (smooch)

Marie Derry: "...What do you think I was doing all those years?" Fred Derry: "I don't know, babe, but I can guess." Marie Derry: "Go ahead. Guess your head off. I could do some guessing myself. What were you up to in London and Paris and all those places? I've given you every chance to make something of yourself. I gave up my own job when you asked me. I gave up the best years of my life, and what have you done? You flopped! Couldn't even hold that job at the drugstore. So I'm going back to work for myself and that means I'm gonna live for myself too. And in case you don't understand English, I'm gonna get a divorce. What have you got to say to that?" Fred Derry: "Don't keep Cliff waiting."

Fred Derry: "You know what it'll be, don't you, Peggy? It may take us years to get anywhere. We'll have no money, no decent place to live. We'll have to work, get kicked around." (smooch)

phantomas thinks this title is suitable for 10 years and over