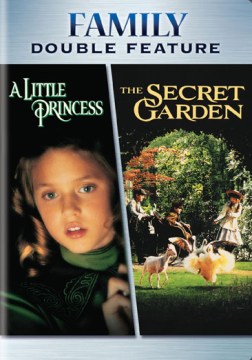 Little princess: Sara Crewe, the pampered daughter of an Army officer, is left in a strict boarding school when her father goes off to war. When he is reported dead, her world is turned upside down and she is made a servant at the school, yet she refuses to let her spirit be broken.
Secret garden: A young orphan named Mary is sent to live at the dark and foreboding English estate of her widowed uncle. She discovers a secret garden which was abandoned after a tragic accident. With the help of her crippled cousin Colin, and Dickon the country boy, her spirit is gradually reawakened as they bring the garden back to life.
Publisher: Burbank, Calif. : Warner Home Video, c2006
Edition: Widescreen and full screen versions on one disc
ISBN: 9781419829833
1419829831

I watch this whenever I need a good cry. And I love that it ends happier than the book. I also like the book, but I like the movie far better.

A Little Princess is truly one of the most beautiful films I have ever seen. It is so inspiring, touching, and flawless in every single way. I feel like every girl should watch this movie no matter their age because the messages it sends are so important. There’s also an incredibly powerful quote from this movie that I just adore, “I am a princess. All girls are. Even if they live in tiny old attics. Even if they dress in rags, even if they aren’t pretty, or smart, or young. They’re still princesses.” I would without a doubt recommend this movie and rate it 5 out of 5 stars.
- @reginaphalange of the Teen Review Board at the Hamilton Public Library

A sweet, touching story that reminds everyone that anyone can be a princess, as long as you believe that you are one, no matter what happens.

A wonderful story full of imagination. One of my all time favourite movies from my childhood.

A beautiful story of imagination, hope, friendship. One of my favorites. A must see for every little girl.

With it’s glorious fairytale cinematography and evocative soundtrack of children’s choral music Princess is sure to enchant little girls everywhere; I even found my own cynical old eyes growing a bit misty towards the end. Still, it’s one thing to be gently manipulated by a director, and quite another to be gripped in a headlock and beaten with fairy wings and pixie dust. In the end, the film’s cloying mix of wistful close-ups and syrupy performances proved to be too much for me. If I had only been a few decades younger...

I think this is a wonderful movie for all ages! this movie is sad, happy and understanding. It's also about imagination and love and how people feel for losing a family member in war.

Must See - This is a delightful and heartwrenching story of a little girl waiting for her daddy to return. Probably the best of the Children's family films. The scenes are well crafted, the art direction is superb and the mood transcends you into that time.

kristenkot thinks this title is suitable for 8 years and over

Its_isha1 thinks this title is suitable for 8 years and over

In 1914, a little girl named Sara lives in a luxurious mansion with her father, a wealthy officer named Captain Crewe. When her father is sent to Europe to fight in the Great War, he sends his daughter to a boarding school in New York City: “Miss Minchin’s Seminary for Girls” which is run by a strict headmistress who thinks Sara's imagination is pointless. Even though Miss Minchin tries to stop her from spreading her stories, she quickly becomes popular with the girls with her highly creative and colourful stories. When Captain Crewe is killed in action, little Sara suddenly finds herself alone and penniless. She was forced to become a scullery maid in order to keep a roof over her head, she soon loses hope of life as a princess. This story inspires hope, friendship, and great imagination.