Saved Searches Advanced Search
Thank you for your support and patience as we continue to evaluate and adjust our operations due to COVID-19. Currently, all of our library buildings are open for Curbside Services (Walk-up & Appointment). You can also reach out to us via our new methods to get in touch with us.
Print 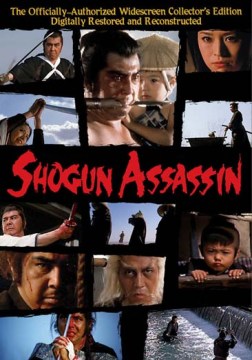 Japan's most feared assassin wanders the countryside with his young son, hunted by the merciless minions of an evil Shogun. Once a noble samurai, he is now the most feared assassin in Japan, known only as Lone Wolf.
Publisher: Wilmington, NC : AnimEigo, [2006]
Edition: Widescreen collector's ed
ISBN: 9781565674721
1565674723

Original samurai story with lots of blood baths and a very special baby cart, fun watch for such genre fans. From the production notes, the film was edited and compiled from the first two films in the Lone Wolf and Cub series, using 12 minutes of the first film, "Sword of Vengeance" and most of "Baby Cart at the River Styx." Both were originally released in 1972. Dubbed in English which is no so good and without caption or subtitles.

This is the edited down version of the six-part "Lone Wolf and Cub" series, based on the manga of the same name. It's a sort of greatest hits (or greatest stabs) compilation.

When I was little, my father was famous. He was the greatest samurai in the Empire. He was the Shogun's decapitator. He cut off the heads of 131 lords for the Shogun. It was a bad time for the Empire. The Shogun just stayed inside his castle, and he never came out. People said his brain was infected by devils. And Daddy's is rotting with evil. ... He wasn't scared of the Shogun, but the Shogun was scared of him.
===
-You must protect our son. They will pay with rivers of blood.
That was when my father left his samurai life and became a Demon. He became an assassin, who walks the road of vengeance. And he took me with him. I don't remember most of this myself. I only remember the Shogun's ninja hunting us wherever we go. And the bodies falling ...And the blood.
===
Mostly, we just keep moving. It's safer that way. That's how I get my education. Just seeing things and always watching out for ninja. Sometimes I fall asleep, but my father never does.

I guess I wish it was different. But a wish is only a wish.
===
Your technique ... is ... magnificent! When cut across the neck... a sound like wailing winter wind is heard... I always hoped to cut someone like that someday...to hear that sound ... But to have it happen to my own neck is ridiculous!...
===
You are trembling. More afraid of peace than war?
===
That was the first time I ever saw my father spare the life of an enemy. He should have killed her, but he didn't. Maybe it's the way she looked at him Maybe she reminded him of someone.
===
When we're on a mission, I keep count of how many ninja my father kills. He says not to keep count, only to pray for their souls. But if I don't keep count, I don't know how many souls to pray for. So I keep count.