Saved Searches Advanced Search
Welcome Back! Curbside Walk-up Service is available Monday through Wednesday from 10:00 AM-5:00 PM (no appointment necessary). Our in-library Express Service is available Thursday through Saturday from 10:00 AM-5:00 PM.  For more information about Express Service participating locations and updated Curbside Services, visit smcl.org/libraryservices.
The catalog, databases and access to accounts will be unavailable for scheduled maintenance from 8:00 PM, Friday, June 18th through 6:00 AM, Saturday, June 19th.
Print 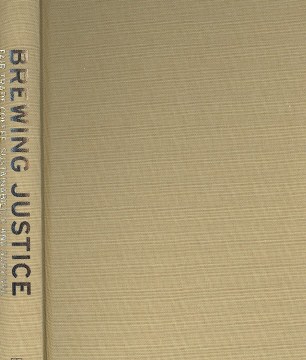 University of California Press
Fair trade is a fast-growing alternative market intended to bring better prices and greater social justice to small farmers around the world. But is it working? This vivid study of coffee farmers in Mexico offers the first thorough investigation of the social, economic, and environmental benefits of fair trade. Based on extensive research in Zapotec indigenous communities in the state of Oaxaca, Brewing Justice follows the members of the cooperative Michiza, whose organic coffee is sold on the international fair trade market. It compares these families to conventional farming families in the same region, who depend on local middlemen and are vulnerable to the fluctuations of the world coffee market. Written in a clear and accessible style, the book carries readers into the lives of these coffee producer households and their communities, offering a nuanced analysis of both the effects of fair trade on everyday life and the limits of its impact. Brewing Justice paints a clear picture of the complex dynamics of the fair trade market and its relationship to the global economy. Drawing on interviews with dozens of fair trade leaders, the book also explores the changing politics of this international movement, including the challenges posed by the entry of transnational corporations into the fair trade system. It concludes by offering recommendations for strengthening and protecting the integrity of fair trade.
"The idea of fair trade in a global economy is central to contemporary debates over neoliberalism, globalization and the rule of the free market. But what are the coordinates of the fair trade moment; what sort of alternative does it offer for producers and consumers? Daniel Jaffee is at once a fierce proponent of fair trade but also a critical voice. How, he asks, can fair trade coffee be in and against the market? With one foot in the Central American coffee fincas and the other in the intellectual world of Karl Polanyi and his disciples, Daniel Jaffee has on offer a very heady brew. Brewing Justice is a pioneering study of the variety of fair trade movements; a prospectus for a more radical vision of fair trade--an alternative sort of market; and a vital contribution to contemporary debates over free trade, the global agro-food system and the so-called 'movement of movements'. A tour de force."--Michael Watts, University of California, Berkeley

"Daniel Jaffee has done the Fair Trade movement a real service in his meticulous research into the actual effect of Fair Trade on coffee farmers in a group of villages in Oaxaca, Mexico. Up till now the claims of Fair Trade benefits for the producers have been largely based on brief visits and anecdotes, but now there is hard evidence. In analysing the market for Fair Trade he distinguishes clearly between those who wish to break the market, those who would reform the market and those who simply want access to a growing market. But his book will be of great value not only in his conclusions about how Fair Trade can be made fairer, but in extending our understanding of the overwhelming power of the giant corporations in international trade, even seeking to improve their image by cooptation and dilution of the standards when faced by the challenge of Fair Trade." --Michael Barratt Brown, author of Fair Trade: Reform and Realities in the International Trading System

"It is possible to establish a global economy that is just, humane, and sustainable. But it will not be easy. The forces favoring injustice, inhumanity, and exploitation are powerful and entrenched. And, for too long, they have been supported by academics and researchers who have not bothered to examine the real costs of globalization on a standard free-trade model, let alone the real opportunities of globalization on an enlightened fair-trade model. Daniel Jaffee breaks new ground with Brewing Justice. His scholarship is stellar. His conclusions are at once realistic and inspiring. In these pages, it is possible to find the roadmap to a new and better global economy. Read them closely, embrace them, and then get to work on building a fair-trade future."--John Nichols, The Nation

"Brewing Justice is an impressive account of the relationships and ethics embedded in fair trade coffee. Engaging the reader in a comparative global ethnography of fair and free trade coffee production, the author evaluates the gains and losses of fair trade for Mexican peasants. Jaffee's unique accomplishment is to show the consuming public how fair trade can be realized through improving the tenuous existence of producers."--Philip McMichael, author of Development and Social Change

"Brewing Justice is at once a sobering account of what the fair trade movement has achieved, and an optimistic statement that only by deepening movements like this one, will society advance in the direction of economic democracy and justice."--Gerardo Otero, professor of sociology and Latin American Studies, Simon Fraser University

"Brewing Justice is not just a study of fair trade coffee. It also provides alternatives to the unfair rules of trade imposed by the WTO. And it shows that we can all play a role in shaping the economy. Drinking coffee is a political act."--Vandana Shiva, author of Earth Democracy

Loading...
No similar edition of this title was found at SMCL.

Try searching for Brewing Justice to see if SMCL owns related versions of the work.