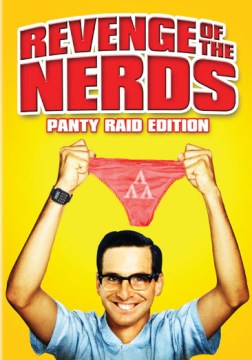 Revenge of the Nerds

Sergeant: See that man over there, we arrested him for mopery.
Booger: What's mopery?
Sergeant: Mopery is exposing yourself to a blind person.

Lewis: [planning the party] Do any of you have dates, besides Gilbert?
Lamar Latrell, Tri-Lam: I do!
Booger: Yeah, but that's with a guy.
Lewis: Well, what about you, Booger?
Booger: I've been out combing the High Schools all day!

Lamar Latrell, Tri-Lam: Clap your hands everybody, and everybody clap your hands. We're Lambda Lambda Lambda and Omega Mu. We come here on stage tonight to do our show for you. We got a rockin' rhythm and a hi-tech sound that'll make you move your body down to the ground. We got Poindexter on the violin, and Lewis and Gilbert will be joining in. We got Booger Presley on the mean guitar and a rap by little ol' me Lamar. We got Takashi beating on his gong, the boys and the Mu's are clapping along. And just when you thought, ya seen it all, along comes a Lambda four foot tall. So Wormser come on out here on the floor, so we can move our bodies, like never before. Break!

Stan Gable: What are you looking at, nerd?
Booger: [to himself] I thought I was looking at my mother's old douche-bag, but that's in Ohio.

[Lewis and Gilbert are discussing Gilbert's girlfriend, innocently]
Booger: Big deal! Did you get in her pants?
Gibert: She's not that kind of girl, Booger.
Booger: Why? Does she have a penis?

Booger: This is bulls**t! I want bush, pan down

Takashi: Excuse please, but why do they call you "booger"?
Booger: [picking his nose] I don't know.

An intriguing documentary (some may say "shock-umentary").

This a typical 80's going away to college movie. Guys are considered cool at the expense of taking advantage of the girls at college.

1) The Nerds break into girls dorms and video tape the girls nude. With no repercussion.

2) One of the guys pretends to be a girl's boyfriend in disguise and tricks her into having sex with him with no repercussion.

3) Sell pictures of a topless female classmate with out her permission, with no repercussion.

This is easily one of my all time favorite movies! The acting is good, and the script is fun and incredibly hilarious. Now while this isn't a must see movie I would highly recommend seeing this movie at least once. And now for the die hard fans a couple bits of trivia..........1.The University of Arizona agreed to let the filmmakers shoot at the campus, then revoked permission after reading the script. Eventually they changed their minds and let them shoot. Many students were used as extras.

2.To test the effectiveness of their "nerd" makeup and wardrobes, Robert Carradine and Anthony Edwards attended a college rush-week, when real fraternities were reviewing prospective pledges (wanna-be members). The fraternity leader of the first house took one look at them both and said, "No way!"

3.Although Booger is arguably Curtis Armstrong's most famous character, he initially didn't want the part. According to his comments on the Panty Raid DVD edition, he originally read for the part of Gilbert, but was later asked to read for Booger. He recalls telling fellow actor Bronson Pinchot that if he was offered the role of Booger, "they could just f*cking forget it. I'm not picking my nose on camera for anyone."

jmthomas thinks this title is suitable for 18 years and over

bdls206 thinks this title is suitable for 17 years and over

At a big campus, a group of bullied outcasts and misfits resolve to fight back for their peace and self respect.