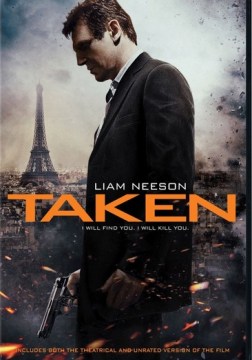 Kim is seventeen years-old and the pride and joy of her father, the ex-CIA agent Bryan Mills. Bryan left the agency to stay near Kim in California. Kim lives with her mother Lenore and her wealthy stepfather Stuart. Kim convinces the reluctant Bryan to sign an authorization form so she can travel to Paris with her friend Amanda. When they arrive, they share a cab with a stranger named Peter. Amanda tells him that they are alone in Paris. While Bryan is on the phone with Kim, Albanese gang members break into the apartment where the girls are staying. Bryan has Kim give him a detailed description of what she sees and hears. He tells her she is about to be kidnapped. Bryan promises Kim that he will come and get her. He immediately travels to Paris to find Kim and Amanda. He has four days to find her and he uses his special skills and contacts to get her back and seek his revenge.
Publisher: Beverly Hills, CA : 20th Century Fox Home Entertainment, c2009
Edition: Extended cut widescreen ed
Characteristics: 1 videodisc (91 min.) : sd., col. ; 4 3/4 in
Additional Contributors: Besson, Luc
Kamen, Robert Mark
Morel, Pierre
Neeson, Liam
Grace, Maggie 1983-
Orser, Leland
Gries, Jon 1957-
Warshofsky, David
Cassidy, Katie 1986-
Valance, Holly
Janssen, Famke 1964-
Twentieth Century Fox Home Entertainment, Inc
EuropaCorp
M6 films (Firm)
Grive Productions
Studio Canal+
TPS Star (Firm)

Taken is an old movie which has become a “classic” in many eyes. The movie is a story about a father (Liam Neeson) trying to save his daughter after a gang kidnaps her. Neeson is the protagonist of the movie for its duration and the story never omits his presence. Neeson’s character is static throughout the movie. While his character’s traits never change or evolve, his actions are very dark and vengeful. He never loses his ruthlessness. The movie stays very consistent to this particular characteristic. The movie keeps on showing more and more ridiculous ways in which Neeson executes the gang members. The movie shows dark scenes to match all of Neeson’s violent actions. The movie’s best quality is how the atmosphere never changes. The movie has a happy ending, but even in the ending Neeson’s mood does not change. A true icon. 4/5. @GOATreviews of the Teen Review Board at the Hamilton Public Library

This is an intense action thriller. Liam Neeson acted as an ex-CIA spy, his teenager daughter had been kidnapped in Paris. With his special skill, Neeson tried to investigate and rescued his daughter from being abducted by the gang.
It is an awesome movie. Highly recommended.

Yes it's stupid. Yes the set up & reactions are absurd. (Especially from the French Govt. officials, blaming an innocent man trying to find his kidnapped daughter, for the fact that the most vile scum imaginable are trying to kill him, & get killed in the process. "A trailer got destroyed!" Uhhhh. And the 100 under aged girls that he exposed there, that were kidnapped, raped, drugged, tortured, and murdered???? Yeah, right. Conveniently, no one mentions that in the dialog...) And yes, they have Liam's character being "Superman". But! The movie redeems itself to 2 1/2 stars by having almost constant action that is mostly "believable" (for a movie; unlike some of Willis' fair, or movies like "The Transporter" LOL!!!!!), not too offensive in it's absurdity, and particularly, because they have Liam's character always kicking butt, and not making any bones about it. (a la Clint Eastwood films) e.g. You don't "love tap" people trying to kill you. You shoot them. Immediately. You don't wait. You shoot them in the back (of the head) if you have to. You don't hang around. You don't talk. Etc. Yes, it still suffers a little from the Hollywood Syndrome I refer to as "Resurrection Syndrome" (i.e. the "main" bad guy is killed 1,562 times in the first 45 min., etc.), but not with most of the bad guys! Hence, 2 1/2 stars. So if you want constant action, and some real a$$ kicking, put your logical mind on hold, strap yourself in, and watch this flick.

Though the film takes some time to get going, once Neeson arrives in Paris, the 91-minute run time flies by like its stuck on fast-forward.

A very moral tale about the dangers that could be encountered by young women on OE.

Typical Liam Neeson, movie. Somebody harms his family he goes to the rescue doing what is legal and not at any cost for their rescue.
HIGH ACTION.
Presents some truth and a good lesson for young women traveling overseas alone or in a pair regarding safety and scams

Here are some things I learned from "Taken:"
1. Don't leave America.
2. If you do leave America, bad things will happen.
3. Don't trust foreigners. Especially immigrants.
4. Torture totally works.
5. Don't get sex trafficed.
6. Don't mess with Liam Neeson.
Despite the anti-European bias, both the director and the producer/co-writer (Luc Besson of "The Fifth Element" and "Lucy" infamy) are French. Go figure. This was the movie that successfully and surprisingly turned Neeson into an action star with a particular set of skills. This delivers exactly what you expect of it, and I have no problem with that. It is lacking a charismatic villain however. This DVD includes an extended cut, which I assume just has more of Neeson beating the everlivin' crap out of people. Followed by 2 sequels, as well as a few movies that seem like they're part of the series, "Non-Stop" (aka "Sky-Taken") and "A Walk in the Graveyard"). I hope Taken and Jason Bourne meet sometime.

Bryan Mills: I have a daughter who wants to be a singer. I was wondering if you have any tips for her.

Sheerah: Yeah, I do. Tell her pick another career.

Saint Clair: "Please understand... it was all business. It wasn't personal." Bryan: "It was all personal to me." (unloads gun into Saint Clair)

Bryan (to Marko, while preparing him for torture): "You know, we used to outsource this kind of thing. But what we found was the countries we outsourced to had unreliable power grids. Very Third World. You'd turn on a switch -- power wouldn't come on, and then tempers would get short. People would resort to pulling fingernails. Acid drips on bare skin. The whole exercise would become counterproductive. But here, the power's stable. Here, there's a nice even flow. Here, you can flip a switch and the power stays on all day. Where is she?"

Bryan (after electrocuting Marko): "You either give me what I need or this switch will stay on until they turn the power off for lack of payment on the bill."

Bryan: I don't know who you are. I don't know what you want. If you are looking for ransom, I can tell you I don't have money. But what I do have are a very particular set of skills; skills I have acquired over a very long career. Skills that make me a nightmare for people like you. If you let my daughter go now, that'll be the end of it. I will not look for you, I will not pursue you. But if you don't, I will look for you, I will find you, and I will kill you.
Marko: [after a long pause] Good luck.

Brendi_B thinks this title is suitable for 13 years and over

EuSei thinks this title is suitable for 16 years and over

A former spy relies on his old skills to save his estranged daughter, who has been forced into the slave trade.