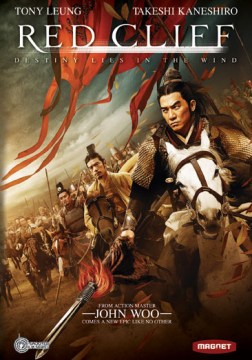 Single B/R disc, International Version that the original 288 minutes of Parts 1&2 was edited down to 148 minutes (see wiki for plots in "Summary.") not the 2-DVD set in akirakato's comment. It resulted in a somewhat cryptic plot, with less background details, but minimized most of the duller moments. Top marks for costume, set design, sound, acting, CGI, combat choreography and story adaptation. Second viewing did not add much but same wonderful experience as first time.

Adding to my previous comment below, it is long, but intriguing for those genuinely interested in Chinese history. There have been worse movies in terms of length where there is no history lesson.

Half way through this so far, at 4 hours 40ish minutes its ridiculously long and does expect you to have a basic background in chinese history during the three kingdom times or you will be lost.

Some decent fight scenes and very realistic settings and costumes couldn't save this one for me. I enjoyed moments of the battles, but for some reason just couldn't really get into it. So... average foreign historical war film.

@CalicoJack: I totally I agree w/ everything you said.

good but is it just me or ?? because they all look the same who is who ?

Intro:
ln the year 208 A.D., Cao Cao leads his army South to destroy Liu Bei, a distant relative of the Royal Family and Sun Quan, ruler of the Southland.
===
Chief Strategist, how does the situation look?
-Cao Cao's pursuing forces are greater than anticipated. The cavalry vanguard will arrive at any moment. The Cao cavalry will use a wedge formation to attack. We will reflect the light into their eyes to hold them off. Remember, the refugees need at least an hour to retreat.
We need a thousand more soldiers for the second line of defense!
-Leave it to me.
===
Liu Bei has lost many battles, yet so many talented men remain loyal to him. One day, they will
all serve under my command.
===
For the alliance to happen, I only need to persuade one other person. Zhou Yu. Viceroy Zhou.

The Goose Formation.
-Not bad. A pity that it is outdated.
===
What are you laughing at?
-I am not laughing, but appreciating. I am appreciating that these soldiers know not only how to fight, but also how to appreciate music.
You are knowledgeable in the art of war.
-Just a little.
Yet you say my formations are outdated.
===
Where will their main target be?
-Right here!
That is the reason why you camped in Red Cliff. You have foreseen this.
-Yet someone said that my formations are outdated.
I have an even more outdated one. Bagua formation. It is indeed outdated. But when used appropriately, it will be very effective
-What are you all talking about? How can this Bagua formation be used on water?
Once you drop, it sinks!

How did you know the fog was coming?
-A clear Milky Way and snaking clouds signal fog is near. If you know how earth, sky, yin and yang change then the sun, moon and stars, the wind, forest, mountains and fire become soldiers at your command.
So you can read Mother Nature's moods, huh?
===
Steal the enemy's weapons then destroy their moral.
-Your strategies worked together brilliantly. Cao Cao must be going crazy right about now.
In two or three days, he will try something desperate.
...
Hear this! In two days, our army shall cross the river and take Red Cliff!

They've locked their boats together to stabilize the fleet. So the Northerners won't get seasick
===
Look, those dark clouds in the east are enshrouding the sun.
-Isn't that rather unusual? ... Zhu-ge Liang, what does that mean?
The winds will change. I know from farming if during a warm winter clouds enshroud the sun, then along the Yangtze River an unseasonal wind will blow.
-What do you mean unseasonal?
A warm southeast wind, It blows from southeast to northwest
===
The barracks are here. East and west are well-defended. The rear hill is weakest. t's like a tiger that stares ahead but forgets its tail.

What makes brewing tea so difficult?
-Leaves, heat, water, and utensils all demand study. Yet the hardest is boiling water.
Boiling water?
-Look! At first boil, bubbles hiss and resemble tiny fish eyes. At second boil, the edge simmers
like a fountain. This is when tea is finest. At third boil, the water seethes and spurts. Any further and the water is past its prime.
===

Letter: Lady Xiao Qiao to Zhou Yu:
My dear husband, by the time you read this I will be on the way to Cao Cao's camp. I will be cautious and only act when the moment is right. Yet I hope the east wind will come early. Where there is faith, there is hope. The clear waters of the Yangtze, the emerald leaves of the mountains, the birds returning to nest, the fisherman singing his evening song. ... This is our home, our beautiful native land. Our people gladly give their lives for her sake. I cannot stand idly by. I have been carrying our child Ping An for three months. I did not tell you fearing it might distract you. We cannot in caring for our child forget the children of the Southlands. I want to see them grow up together to have a future where they can play, swim, pick flowers and plant rice in peace.

I never guessed I'd lose to a gust of wind.
-Because you don't understand the Will of Heaven.
I never dreamed I'd be defeated by a cup of tea.
-For you, war was just a tea ceremony.
===
The world is full of heroes, but you're the one I most fear offending. You would be an opponent I truly fear
-Me? I'd best return home and get some sleep.
===
War knows no friends. Tomorrow, they shall be your enemies.
===
Zhou Yu, I have done all I can. Tonight will decide the fate of the empire. There must be no mistakes.
===
Zhu-ge Liang. you weren't lying after all! (As the East Wind began to blow.)
===
Your Highness. Don't you see your true self reflected in this tea? Your heart is overflowing with ambition. It's too full to let other people in. You've carried this full heart to Red Cliff. Someone here shall pour that heart onto the floor.

jvanderg thinks this title is suitable for 12 years and over

The film was shortened from 288 minutes to 148 minutes:

Part 1 ends with Zhou Yu lighting his miniaturised battleships on a map based on the battle formation. and part 2 featured the epic naval battle: "The battle begins when the southeast wind starts blowing in the middle of the night. Sun Quan's forces launch their attack on Cao Cao's navy by ramming smaller boats that are set aflame into Cao's larger battleships."