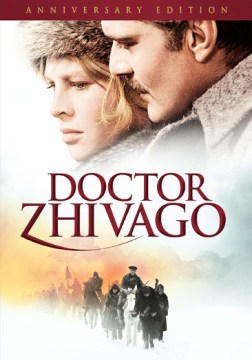 Traces the life of surgeon-poet Yury Zhivago before and during the Russian Revolution. Married to an upper-class girl who is devoted to him, yet he finds himself in love with an unfortunate woman who becomes his muse. Zhivago becomes torn between fidelity and passion. Sympathetic with the Bolshevik revolution, but shaken by the wars and purges, he struggles to retain his individualism as a humanist amid the spirit of collectivism.
Edition: Anniversary edition
ISBN: 9781419885945
1419885944

A film I have seen several times plus the remakes. This original is the grandest, partly because of the cast. Too bad no more special screenings on large screen theaters anymore. I still recall feeling goosebumps watching the wintry scenes with the mesmerizing Lara's Theme playing with the balalaika, sitting inside a dark and cool air conditioned theater during a hot summer day ... then there is young Julie Christie and her men amidst the Russian Revolution!

Exchange "carriage" for "troika" and you are left with Russia's unofficial version of "Gone With the Wind"!

Lush and Romantic one of the great films ever made. Julie Christy is perfect and beyond beautiful. Great scenery and score ~ 420% Watch it with the one you love

“Love is life. All, everything that I understand, I understand only because I love.”
– Leo Tolstoy

[Doctor Zhivago], adapted from the novel by Boris Pasternak and filmed by the great David Lean, remains one of the world’s great epics of film. On the face, the film is a tragic romance that follows a young Russian doctor, his family, and his forbidden lover through the tumults of World War I, the Russian Revolution, the Russian Civil War, and the Stalinist period. But, as with all epics, nothing is so transparent.
As filmed by Lean, [Doctor Zhivago] is an enjoyable adventure that is stuffed with epic, unforgettable vistas, iconic but tortured heroes and complex villains, excellent editing, memorable dialogue, and even a Chekhov’s gun. Everything about this film was first-rate then, and arguably even now.
From [Lawrence of Arabia], Lean not only re-enlisted Omar Sharif and Alec Guinness, but also Maurice Jarre for the score, screenwriter Robert Bolt, and cinematographer Freddie Young. Great performances herein by Julie Christie as Lara, Rod Steiger as the intriguingly immoral Victor Komarovsky, Tom Courtenay as the naïve young activist Pasha, Rita Tushingham as Tanya, Lili Murati as the train jumper, Klaus Kinski in a superb but albeit too brief a role. And true to epic form, a background cast of thousands.
Upon release, many contemporary critics savaged [Doctor Zhivago] for its lengthy and indirect plot that spanned over three hours. Other critics condemned a lack in character development, a central romance they felt was over-hyped, and for much heavy-handed soppiness. Still some condemned the loose adaptation for missing out on the meaning behind Pasternak’s original novel and his poetry. But the contemporary critics had it wrong. In fact, the People insisted that the critics were wrong.
As with James Cameron’s [Titanic], decades later, audiences loved this technical masterpiece centred on a doomed romance, especially as buoyed by its massively popular score by Jarre. When adjusted for inflation, [Doctor Zhivago] earned over a billion dollars. But is [Doctor Zhivago] a good film?
[Doctor Zhivago] is slow but technically marvelous, beautiful, and intelligent. It is not a bad film. Bad films tend to prompt their audiences to ask, “Was this film necessary?” Was [Justice League] necessary or [Plan 9 from Outer Space]? There is a consensus that even if he wasn’t broke at the time, Francis Ford Coppola had no reason whatsoever to film [The Godfather Part III].
Good films, like [Doctor Zhivago], asks us questions.
Does Dr. Yuri Zhivago’s struggle between his wife and his lover, his past and his future, the comforts and lustre of the Romanov-era versus the firmness of the revolutionary period, mirror the Russian nation’s painful entry into modernity?
Does the film provide a critique of the Revolution or the USSR or collectivism? That is, whether it was right or wrong, good or bad that the initially populist revolution was subverted into a force that steamrolled the people into compliance or worse?
Can collectivism provide the individual with the essentials of life, i.e. family, friendship, passion, community, meaning, truth, and love?
The film prompts us for answers, none that I can provide in the space given here. But as it was in the film, Lean’s [Zhivago] ends with a final piece of wistful idealism: that the new generation should avoid the confusion, the errors, and the waste of their parents.

I’m no more, but you’re still alive,
And the wind, complaining, weeping,
Sways the forest and the dacha,
Not each pine tree separately,
But all in their entirety,
With all the boundless distances,
Like the hulls of sailing ships
On the smooth surface of a harbour.
And it’s not out of mere bravado,
Nor out of pointless fury, but
So as in anguish to find words
To make for you a lullaby.

It is worth watching the background disc first to hear the actors being interviewed about their roles. Omar Sharif is such a professional.

looking beyond adultery being celebrated as an 'epic' grand passion, this movie was at times compelling, and was obviously created for the viewer to savor the blend of lush scenery, and emotional performances.

Note Theres Several Versions in Circulation. the Original 1965 Version is the only one worth seeing as it won several Academy Awards. This Review is about that one. This film is considered one of the Top Movies of All Time as a must-see.
/
Its incredibly romantic, intriguing, and action packed as well as very significant to the better understanding of the Russian Revolution. Fantastic Cinematography and Scenery too and should come with a WIDE SCREEN FORMAT DVD.
/
The Drama constantly tears you in all directions, never knowing where the characters are going or what romances will ever start. Just when you think they finally will they don't, and vice-versa. But I wont spoil the end. I'll merely say there were plenty of romantic and joyful moments throughout various points in the story and leaves you on a good note.
/
This movie is also OVER THREE HOURS long and has at least two "intermission sections" with just music, so be prepared to spend the whole evening watching this. Unlike some long movies however, this one is sure to keep most of your attention throughout it as theres always something fascinating happening.

Wow. Huge scale, and gorgeous scenery, but a pretty simple love story. Cool to see Alex Guinness and Omar Sharif at that age. Would benefit from some complexity in the score, though.

What I want to know is how we're going to stay alive this winter.

Komarovski (to Lara): "There are two kinds of men and only two. And that young man is one kind. He is high-minded. He is pure. He's the kind of man the world pretends to look up to, and in fact despises. He is the kind of man who breeds unhappiness, particularly in women. Do you understand? I think you do. There's another kind. Not high-minded, not pure, but alive. Now… that your tastes at this time should incline towards the juvenile is understandable; but for you to marry that boy would be a disaster. Because there's two kinds of women. There are two kinds of women and you, as we well know, are not the first kind. You, my dear, are a slut."

Zhivago: "What happens to a girl like that, when a man like you is finished with her?" Komarovski: "You interested?" Zhivago: "You shouldn't smoke. You've had a shock." (he pulls the cigar from Viktor's mouth, tosses it into the toilet) Komarovski: "I give her to you, Yuri Andreevich. Wedding present."

Pasha: "I used to admire your poetry." Zhivago: "Thank you." Pasha: "I shouldn't admire it now. I should find it absurdly personal. Don't you agree? Feelings, insights, affections... it's suddenly trivial now. You don't agree; you're wrong. The personal life is dead in Russia. History has killed it. I can see why you might hate me." Zhivago: "I hate everything you say, but not enough to kill you for it." Pasha: "The private life is dead - for a man with any manhood." Zhivago: "I saw some of your 'manhood' on the way at a place called Minsk." Pasha: "They were selling horses to the Whites." Zhivago: "It seems you've burnt the wrong village." Pasha: "They always say that, and what does it matter? A village betrays us, a village is burned. The point is made." Zhivago: "Your point - their village."

Lara (to Zhivago): "Oh Lord, this is an AWFUL time to be alive!"

Lara: "Wouldn't it have been lovely if we'd met before?" Zhivago: "Before we did?" Yes. Lara: "We'd have got married, had a house and children. If we'd had children, Yuri, would you like a boy or girl?" Zhivago: "I think we may go mad if we think about all that." Lara: "I shall always think about it."

bdls206 thinks this title is suitable for All Ages

Life of a Russian doctor/poet who, although married, falls for a political activist's wife and experiences hardships during the Bolshevik Revolution.