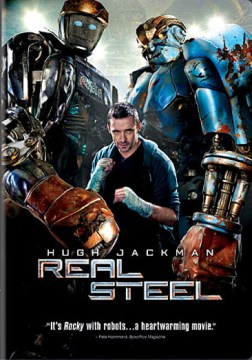 A bit conflicted about this movie.

Positives:
It's from a short-story of a writer I admire greatly: Richard Matheson. Movies from his work include Benjamin Button, the Incredible Shrinking Man, I am Legend (filmed 3 times) What dreams May Come, Somewhere In Time, Stir of Echoes. How MUCH of Matheson is left? My hunch: the basic premise, but not so much the "farther/son" stuff...which Spielberg loves to hang his cinematic hat on.

Visually, it's a kick; the artistry of those Robots--and they're real; no CGI on Atom or any of the others. The fight scenes are extremely effective.

Good performances all around, especially the kid, Canadian Dakota Goyo.

Negative:
If it was an ADULT film, I could excuse the boxing premise. But it's a KID movie. You know it, I know it, Steven Spielberg--the producer--knows it. It's also easy to see it as a male macho stereotype movie. Which means not only the boxing concept is suspect, but so is the premise of the father's redemption at the end. Uh-oh.

Do you really want you kids to see this?

The ending's a cop-out. Sure, the "underdog" robot wins the fight--but does the kid win his father? Or, perhaps, does the father win the kid? Fade Out before we get to find out.

I don't recommend this movie for entertaining yourself.

This was an okay movie, personally I don't recommend wasting a movie night on this.

Huh. If it didn't have Hugh Jackman and Evangeline Lilly in it, I wouldn't have bothered. It had a few other famous actors in it too. But the plot was predictable, formulaic, nonsensical, and boring. The SFX was great, but there were a lot of things that were just mediocre. I'm not watching this again, and I honestly think I shouldn't have taken the trouble to get this out of the library and watch it.

Pretty entertaining action flick for all ages, that mostly uses giant robots for the violence, similar to Transformers movies, or a monster truck rally.
Though, I almost turned this off near the start, when Dakota Avery Goyo (playing Max Kenton) appeared and was a brat.
A few scenes later, his personality changes to be agreeable, and gains our sympathy, as he bonds with his also stubborn father, Hugh Jackman (playing Charlie Kenton), on the robot fighting circuit.

This movie caused me to think that once Actors have children they start making the ones their kids can watch.

If this hadn't been Hugh Jackman and Evangeline Lilly, I'd never been able to watch it through to the end. To me not much glue holding it together.

Revenge of the jock. Beat the nerds at their own game. Nice premise, but fighting robots still decades away from reality.

how many times is Wolverine going to play the "Coach" roll to a machine? somebody boot up Chappie...

This movie combine ideas with the movie Rocky and the Wii video game. You still feel it's human boxing even it's Robot fight.

Gwen904 thinks this title is suitable for 10 years and over

ReneeMG06 thinks this title is suitable for 9 years and over

Les_J thinks this title is suitable for 7 years and over

aaronpasco thinks this title is suitable for 11 years and over

hoangtran125 thinks this title is suitable for 15 years and under

avanderw thinks this title is suitable for 12 years and over

SilkyNara thinks this title is suitable for 13 years and over

indigo_cat_379 thinks this title is suitable for All Ages

TheBigMan thinks this title is suitable for 13 years and over

Sexual Content: Flirting, kissing, and some slightly inappropriate outfits. Charlie has fathered a son even though he is not married to his girlfriend.

Coarse Language: Just a bit, it's a PG-13 movie after all.

Violence: If robots beating the crap out of each other seriously bothers you, this might not be your movie.

Max Kenton: Shut up! You're not helping!
Charlie Kenton: Actually, I think I am.

Set in the near future, where robot boxing is a top sport, a struggling promoter feels he's found a champion in a discarded robot. During his hopeful rise to the top, he discovers he has an 11-year-old son who wants to know his father.