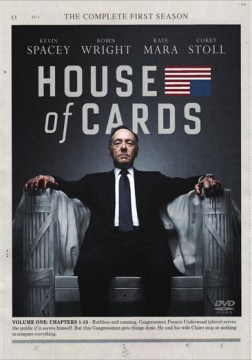 I hate myself for waiting this long to watch this series. It is repulsive and cringe worthy and I love every minute of it.

One of the best shows on Netflix!

American version of classic British yarn about political manipulation and intrigue within the federal government and Congress. Very addicting plots and characters led by Kevin Spacey's character Frank Underwood. It is definitely an adult comedy/drama with lots of tongue-in-cheek scenes. Highly recommend it as a weekend flick.

Comment disappeared but recall bowled over by this ground breaking political thriller and Spacey's slimy performance. While based on the British trilogy but much dirtier and more complex plots. Anyway, able to repopulate the quotes.

An interesting debut with a thrilling finale, the first season of HOUSE OF CARDS is primarily about the promise of more. Hang in there; the White House is burning, I promise. Kevin Spacey is Frank Underwood, the metaphorical arsonist, smiling with Southern charm to distract from the fact that he is undoubtedly taking everyone down. His wife Claire, played coldly and expertly by Robin Wright, spells out a terrifying twosome who feel at home manipulating the political players to concede to the Underwoods’ every whim. What a sick delight to witness it all. I recommend it.

I can't think why Kevin Spacey wasted his talent on this pale imitation of the BBC 'House of Cards' series. Good acting ability does not compensate for a half baked script and an implausible story line.

Not quite as good as the UK 's original. The Americanization may make it more accessible.
The HBO variant is softer edged.
Ian Richardson in the original is more acidic than Kevin Spacey's. Each variation stands on its own.

Good update on an old classic. Has some but not all of the original's allure.

Frank Underwood: You see, Freddy believes that if a fridge falls off a minivan, you better swerve out of its way. I believe it's the fridge's job to swerve out of mine.

Frank: There are two kinds of pain. The sort of pain that makes you strong. Or useless pain. The sort of pain that's only suffering. I have no patience for useless things. Moments like this require someone who will act. To do the unpleasant thing. The necessary thing... [puts the dog out of its misery] There, no more pain.
===
Frank: I love that woman. I love her more than sharks love blood.
===
Frank: I almost pity him. He didn't choose to be put on my platter. When I carve him up and toss him to the dogs, only then will he confront that brutal, inescapable truth.
===
Priest: And, of course, we should enjoy our success and be grateful for it, but never let your gratitude sour into pride. You'll have many challenges ahead over the next couple of years, and a person's character isn't determined by how he or she enjoys victory but rather how he or she endures defeat. Nothing can help us endure hard times better than our faith.

Frank: Such a waste of talent. He chose money over power - in this town, a mistake nearly everyone makes. Money is the McMansion in Sarasota that starts falling apart after 10 years. Power is the old stone building that stands for centuries. I cannot respect someone who does not see the difference.
===
Frank: What a martyr craves more than anything is a sword to fall on, so you sharpen the blade, hold it at just the right angle, and then 3, 2, 1--
===
Frank: I grew up here, in the up country - Bibles, barbecues, and back breaking. Everything gets just a little bit thicker this far south - The air, the blood, even me. I try to make it down here at least once a month. Every trip is a reminder of how far I've come. I hated Gaffney as a kid, when I had nothing, but now I've come to appreciate it. It's not as suffocating as it once was, except when I have to deal with the sort of nonsense that makes me want to hang myself.

Frank: You know what no one wants to talk about? Hate. I know all about hate. It starts in your gut, deep down here, where it stirs and churns. And then it rises. Hate rises fast and volcanic. It erupts hot on the breath. Your eyes go wide with fire. You clench your teeth so hard you think they'll shatter. I hate you, God. I hate you! Oh, don't tell me you haven't said those words before. I know you have. We all have, if you've ever felt so crushing a loss. There are two parents with us today who know that pain, the most terrible hurt of all- losing a child before her time. ... And while God may not give us any answers, He has given us the capacity for love. Our job is to love Him without questioning His plan. ...

Walker: Are you letting pride cloud your judgment, Frank?
Frank: Respectfully, sir, you're allowing fear to cloud yours.
===
Hammerschmidt: Is it my job to pander to all my employees--
Tilden: My employees.
===
Frank: Love of family: most politicians are permanently chained to that slogan, family values. But when you cozy up to hookers and I find out, I will make that hypocrisy hurt.
===
Frank: It's so refreshing to work with someone who'll throw a saddle on a gift horse rather than look it in the mouth.
===
Frank: You see, Freddy believes that if a fridge falls off a minivan, you better swerve out of its way. I believe it's the fridge's job to swerve out of mine.

Frank Underwood: I'm a white-trash cracker from a white-trash town that no one would even bother to piss on. But here's the difference — I've made something of myself. I have the keys to the capitol. People respect me. But you, you're still nothing. You're just an uppity dago in an expensive suit turning tricks for the unions. Nobody respects the unions anymore,
===
Claire: You know what Francis said to me when he proposed? I remember his exact words. He said, 'Claire, if all you want is happiness, say no. I'm not gonna give you a couple of kids and count the days until retirement. I promise you freedom from that. I promise you'll never be bored.' You know, he was the only man - and there were a lot of others who proposed - but he was the only one who understood me. He didn't put me on some pedestal. He knew that I didn't want to be adored or coddled. So he took my hand and put a ring on it. Because he knew I'd say yes.

Frank: I have zero tolerance for betrayal, which they will soon indelibly learn.
===
Danton: I don't eat pork.
Frank: When did that happen?
Danton: When we started lobbying for the meat packing industry.
===
Russo: You don't understand, I'm not afraid of you anymore, Frank.
Frank: Then you're misguided.
===
Frank: Proximity to power deludes some into believing they wield it.
===
Frank: A great man once said, everything is about sex. Except sex. Sex is about power.
===
Frank: The Citadel, South Carolina's premier military college. They taught me the values of honor, duty, and respect. They also hazed me, tried to break me, and, senior year, nearly expelled me when I volunteered for a Senate race and my studies suffered. But that didn't stop them from soliciting a hefty sum for their new library 30 years later. How quickly poor grades are forgotten in the shadow of power and wealth.

Frank: Every time I've spoken to you, you've never spoken back, although given our mutual disdain, I can't blame You for the silent treatment. Perhaps I'm speaking to the wrong audience. Can You hear me? Are You even capable of language, or do You only understand depravity? Peter, is that you? Stop hiding in my thoughts and come out. Have the courage in death that you never had in life. Come out, look me in the eye and say what you need to say. There is no solace above or below. Only us - small, solitary, striving, battling one another. I pray to myself, for myself.
===
Claire: I envy your free spirit, and I'm attracted to it, but not all of us have that luxury.
-Which is what I find so frustrating about you, Claire. You-you had a choice. You chose not to be free.
Claire: No. What I chose was a man I could love for more than a week.

Frank: He doesn't measure his wealth in private jets, but purchased souls.
===
Frank: Of all the things I hold in high regards, rules are not one of them.
===
Tusk: Decisions based on emotion aren't decisions, at all. They're instincts. Which can be of value. The rational and the irrational complement each other. Individually they're far less powerful.
Frank: I said to my professor, "Why mourn the death of Presidents, or anyone for that matter? The dead can't hear us." And he asked me if I believed in heaven. I said no. And then he asked if I had no faith in God. I said, "You have it wrong. It's God who has no faith in us."
===
Tusk: Lack of preparation or lack of luck?
Frank: Lack of both. He was better at giving advice than following it.

Frank: Of all the things I hold in high regards, rules are not one of them.
===
Claire: I am willing to let your child wither and die inside you, if that's what's required. Am I an enemy you want to make?
===
Tusk: I never make an offer more than twice, Frank. Tell me now if I can count on your cooperation.
Frank: You're not offering cooperation, you are demanding tutelage. So let me make you a proposal. I am absolutely willing to work together as equals. I will take your opinions seriously, just as the president does. But I will not bind myself to them in advance. If that doesn't interest you, fair enough. Good luck finding a vice president in the next four days who will prove as pragmatic as I. You can't purchase loyalty, Raymond. Not the sort I have in mind. If you want to earn my loyalty, then you have to offer yours in return. And if we can agree to that - well, you're a man with imagination.

rem85 thinks this title is suitable for 16 years and over

vcc thinks this title is suitable for 18 years and over