Saved Searches Advanced Search
Thank you for your support and patience as we continue to evaluate and adjust our operations due to COVID-19! Currently, all of our library buildings are closed. However, we’re still here to support you!  Our Libraries will offer Curbside Pickup starting Saturday, June 6! Learn more about our innovative online services, or reach out via our new methods to get in touch with us.
Print 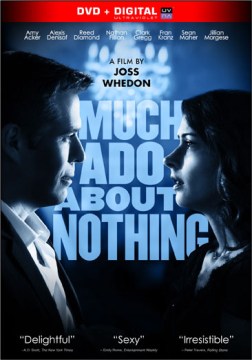 Much Ado About Nothing

to paraphrase Pink Floyd, their lips move but we can't feel what they're saying - the actors go through their lines, sometimes deftly, but they don't communicate their humanity - also Shakespearean courtesy doesn't translate well to our more sexually extroverted 21st Century, modesty isn't one of our prevailing characteristics

Joss Whedon’s adaptation is a gem. Transported to contemporary times and shot in black and white, this film is beautiful in its minimalism as it is resonant to our lives today. A genuine labor of love with a cast of fine actors it is both enjoyable and remarkable. Kudos! Highly recommend.

Here's what I really liked about this film--I forgot I was watching an adaptation of Shakespeare in modern times. Sure, I knew the film itself was new, and I recognized the modern setting in the first scene, but immediately it became irrelevant. The characters, the setting, the language, all took me back to another time. It made the heart of Shakespeare's story much more important than in many, more showy modern adaptations. And that seems to be the focus here: the filmmakers remained true to the original on multiple levels.

Italian names, American accents, modern American suburban professional middle class scenes, all with Shakespearean language. Its in black and white, but that makes it even more tepid and more fake. And it wasn't funny either.

"You must not, sir, mistake my niece. There is a kind of
merry war betwixt Signor Benedick and her."
For every successful Shakespeare film, there are about 3 that don't work. A key problem is that contemporary film actors can't really make his language convincing. Another is that directors too often go for gimmicks (Shakespeare in Miami! Shakespeare in space!) rather than substance. Joss Whedon's adaptation of the comedy "Much Ado About Nothing" doesn't take many liberties, even though it's in modern dress. Whedon and his friends spent about 2 weeks filming this at his house so it has a loose, low-key feel to it and Whedon fans will recognize a lot of the actors from other projects. Comparisons with Kenneth Branagth's 1993 version are inevitable. That wasn't a great film, but it had a better cast and more spirit. This is just kind of boring, with many of the actors coming off as awkward. Really only Clark Gregg, Nathan Fillion, and Amy Acker (as Beatrice) pull it off. Modern audiences will no doubt be a little confounded by the whole virgin/cheating/fake death subplot. It is a fairly accessible version of Shakespeare and would probably work well in a class. "Sigh no more ladies, sigh no more. Men were deceivers ever."

Apparently shot over twelve days in and around his Santa Monica estate with a cast of industry friends, Joss Whedon’s tepid take on Shakespeare’s romantic farce looks and feels like an overly ambitious home movie. Presented here in casual B&W with all the flair of a yuppie garden party, Whedon does exhibit some imaginative staging with manly arguments taking place amidst the girly trappings of a child’s bedroom and a pair of bumbling police detectives stealing the show with their Laurel & Hardy schtick. But even though Shakespeare’s razor sharp musings on what motivates the sexes are timeless and Whedon claims to have stayed true to the Bard’s prose (with a little editing due to time and budgetary constraints), this truncated southern California version still seems somehow dummied down. Would have made a great student film.

Much ado about something. Very good with a natural feeling to it that goes well with that Wonderful House. I wish that I had read this beforehand, but just turn it up and listen carefully as it is easily followed. Gregg Clark & Amy Acker were especially good. It came up as a well improvised big old, just plain party. (look at the list of other players at the end...it was huge). Make sure to watch the extra "Bus ado about nothing", Quite fun.

I liked this a lot more than I thought I would. It is really funny and well acted.

This is a good drama, done in black and white. A modernized version. Lots of creativity in this movie! This is not a high-budget movie; yet, it was good.
Yet, if you have seen the original, high-budget movie, "Much Ado About Nothing," and have same expectations, then you will be probably disappointed.
So, I suggest, you go into this movie with an open mind and no expectations! :) Give it a go, and you just might be pleasantly surprised!

Enjoyabler, but It was a bit hard for me to follow. I'm glad I had subtitles turned on since the Shakespearean style of English can be somewhat difficult to follow.

When I first heard that Joss Whedon, my favourite director, was filming an adaptation of my favourite play, Much Ado About Nothing, by my all-time-favourite-leave-me-on-a-desert-island-with author William Shakespeare, my inner geek gave a loud squeal of joy. When I heard that most of the cast would be from the Whedon ‘verse (former stars of Buffy, Angel, Firefly and The Avengers), my inner geek did a cartwheel and I started counting the days until I could watch this perfect coalescence of film and theatre geekery. Alas, it was not given wide distribution in cinemas, so it was out of reach until available on DVD.

Although filmed on a shoestring budget in less than a week, this version of Shakespeare’s romantic comedy of wits could fool one into thinking it is a clever indie film shot over a number of months. Although shot in a contemporary time and setting (Whedon’s own home, I believe), Whedon’s distinctive framing and the choice of shooting it in black and white gives this version a very classic feel. Yes, the normally three-hour play has been trimmed to a neat 109 minutes, something at which true Shakespeare aficionados may balk, but it is a small price to pay, in my humble opinion, for watching Amy Acker’s stormy, prat-falling Beatrice, or Nathan Fillion’s improvisational antics as Dogberry (pulling of a pretty credible iambic pentameter to boot) - not bad for a bunch of tv and film actors with little to no rehearsal time.

In the dead of winter with the opening of the Stratford Festival still several months away, those with theatre withdrawal can now enjoy this delightful film – and those fans of Joss Whedon can marvel once more at his mastery of the silver screen.