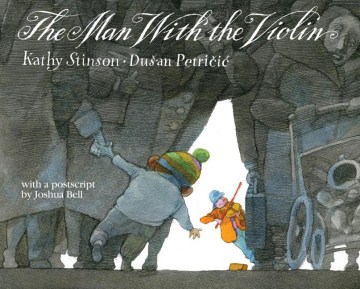 The Man With the Violin

When Dylan hears someone playing their violin in the subway he wants to stop and listen, but his mother and other commuters ignore the violinist completely. It also includes a brief biography of Joshua Bell.
Publisher: Toronto :, Annick Press,, [2013]
Copyright Date: ©2013
ISBN: 9781554515653
1554515653

MUST read!!!! What an amazing story based on an actual true event. This gorgeous picture book is based on the true story of Joshua Bell, the famous violinist who played a free concert in the Washington DC subway. More than a thousand commuters rushed by him, but only seven stopped to listen for more than a minute. Kathy Stinson has woven a heart-warming story that reminds us all to stop and appreciate the beauty that surrounds us. The vivid text combined with illustrations that pulse with energy and movement show the power of music and how it enriches our lives. (submitted by DS)

The illustrations in this story effectively portray the captivating violin music and the feeling of rhapsody that it instills in the child. It's too bad that this short book wasn't accompanied by a sampler CD of Joshua Bell's violin music.

A great story about a real violinist that Daniel loved very much. Our little musician said he can even hear the beautiful melody and rhythm by Joshua Bell while he was reading the book.

This beautiful, poignant retelling of a true story is wonderfully illustrated. It is the story of Joshua Bell, a remarkable violinist, who one day plays at a Washington, D.C. subway. Children recognize the quality of the music unfortunately adults are too busy to stop and smell the roses. I just loved the book and look forward to reading it aloud to many children.

Remember hearing about this occurrence / experiment on the news . How everyone was too busy to stop and listen and missed a golden opportunity to hear a virtuoso . Except the children noticed . Good story .

What happens when a world-famous musician busks in a metro station?

Awesome for children and adults, alike!

As Dylan and his mom rush through the subway station, Dylan is entranced by the beautiful violin music that fills the air. Why won’t his mother slow down and listen to it with him?

The notes seemed to soar to the ceiling and swoop to the floor. Dylan wanted to stay to listen to the entrancing story that the mysterious violinist was playing in the subway station. He wanted to dance; he wanted to be carried here and there by that wonderful music … but try as he might, his mother was in too much of a hurry to stop even for a minute.

Why wouldn’t his mother stay to listen to the music with him even for a few moments? Why was no one else stopping to listen?

The memory of the music stayed with Dylan for the rest of the day.

That evening, when the hustle and bustle of the day were finally over, Dylan was able to find a way in which he and his mother could listen together to the beautiful violin music in its entirety.

This compelling story reminds both children and adults of the power of music and the importance of taking the time to listen and be delighted by what we hear. It is based on a true incident. On January 12, 2007, world-renowned violinist Joshua Bell took part in an experiment planned with the Washington Post. Dressed as an ordinary street musician, he played his Stradivarius violin in the L’Enfant Plaza Subway Station in Washington, D.C. for 43 minutes to see what would happen.

Although over a thousand commuters walked by him, only seven people stopped to listen for more than a minute … yet people around the world pay $100 and more to listen to this musician in concert! (However, during the 43 minutes in the subway station, Bell noticed several children who obviously wanted to stop to listen, only to be hurried along by accompanying adults.)

Kathy Stinson, an award-winning Ontario children’s author best known for Red is Best, has told this story about music with words and prose that seems to rise and soar like the notes of a song, using long and short sentences, alliteration and other literary devices. Dusan Petricic’s striking illustrations, done in graphite and watercolor, aptly compliment this outstanding picture book

Music flows from page to page in wispy swirls of colour, entrancing the young boy, Dylan. While he strains to hear it, the rest of the busy world rushes past this wondrous sound, leaving in its wake a set of harsh noises. Black, angular shapes representing the raucous city life, contrast with the colourful, flowing lines that come from the violinist. Graceful descriptions seek to capture the essence of this melodious sound, as well as the impact it has on the boy. These words sing in our ears, until the real world crashes in with its onomatopoeic words. All ends well though, for the boy is once again swept off his feet, literally embraced by the lines of music. The book is based on a true event, an experiment that showed how, even for one of the finest musicians in the world, most people will not take the time to appreciate it in their daily lives. This realization is sad, however, rather than focusing on this, the author ends on a positive note. Dylan finally convinces his mother to stop and listen.