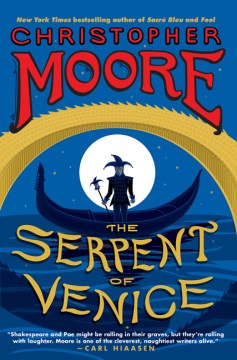 The Serpent of Venice

Three prominent Venetians lure Pocket, an envoy from the Queen of Britain, into a dark dungeon, hoping to drug and kill him, but Pocket has more than a few tricks up his sleeve.
"Venice, a long time ago. Three prominent Venetians await their most loathsome and foul dinner guest, the erstwhile envoy from the Queen of Britain: the rascal-Fool Pocket.This trio of cunning plotters--the merchant, Antonio; the senator, Montressor Brabantio; and the naval officer, Iago--have lured Pocket to a dark dungeon, promising him an evening of spirits and debauchery with a rare Amontillado sherry and Brabantio's beautiful daughter, Portia. But their invitation is, of course, bogus. The wine is drugged and the girl is not even within the city limits. Desperate to rid themselves once and for all of the man who has consistently foiled their grand quest for power and wealth, they have lured him to his death. (How can such a small man, be such a huge obstacle?). But this Fool is no fool and he has more than a few tricks (and hand gestures) up his sleeve. Greed, revenge, deception, lust, and a giant (but lovable) sea monster combine to create another hilarious and bawdy tale from modern comic genius, Christopher Moore"-- Provided by publisher.
"William Shakespeare meets Edgar Allan Poe in New York Times bestselling author Christopher Moore's THE SERPENT OF VENICE! Oh, yeah, and everyone's favorite fool, Pocket of Dog Snogging, is back, too"-- Provided by publisher.
Publisher: New York, NY :, William Morrow,, 2014
Edition: First edition
ISBN: 9780062194879
0062194879

Shylock wins! As an atheist, and a friend of Jews, I am more satisfied with Moore's ending of the stories than Shakespeare's, as great as the Bard is! Iago gets what he deserves, as does Antonio, who is a lot less sympathetic than he is in the play! Othello and Desdemona get to live, which makes me very happy! And Pocket gets to take the Christians to task for their blatant hypocrisy!

Didn't enjoy it. Not my taste in humor, Others may like it, but I really did not.

The story is a nice mix on the "The Merchant of Venice" and "Othello" both from Shakespeare. The story revolves around Pocket from Moore's "Fool". Which gives a nice element as you read from a character that you might have grown attached to. Although Pocket doesn't spend much of the book with some of the other characters from Fool. It's still enjoyable to see him progress in this story. Although the humor isn't as noteworthy from most of Moore's book, it's still there and I did find myself smiling or chuckling once or twice. Overall the story progresses well as you learn more and more about Pocket's past and how he develops through the story, the humor is still present, and there are still some quirky scenes that Moore puts in frequently throughout the story, somewhat like his other books. I rate this book 4/5.
- @QantiTB of the Teen Review Board at the Hamilton Public Library

Pure, unadulterated genius from Christopher Moore. I have read them all. Somehow he manages to make the most unlikely story line come together in the most delightful way. He is a true favorite of mine. Moore's bawdy naughtiness is only rivaled by Terry Pratchett's wit and humor. It's nice to be able to read something smart and belly laugh from the joy of it. Well that and the creative cursing!

An awesome piece of work. I have only the barest knowledge of the Merchant of Venice, and i loved this. It's very rude, mind you, but great. Read "Fool" first to get the full effect and understand all the references.

Loved it! Now I have to go and read Fool!

Change your relationship with Shakespeare forever. Read this book. You will laugh from the first page to the last.

Absolutely excellent. This and Fool are some of Moore's top writes!

reviewed in the Stratford Gazette, May 2014

Didn't enjoy it as much as Fool, but still an enjoyable read. Plot was a bit scattered as Moore can be but you should know what you are getting with him by now.

What love is not torment when a man knows not how to love himself? Talk not of drowning, but attaining your heart's desire by action: Put money in thy purse.

I actually prefer the future when it's more abstract, I think. dark. Yes, I've made friends with the dark. More than friends. I've learned to fuck the dark. We are one.

When that which makes a warrior hard is met with beauty most offered tender, then he can find love.

oh that's right, you can't wager, can you? You have nothing. "True," said I. "Yet you see a victory in what is a simple truth for all of us, is it not? We have nothing, we are nothing.

"Fine, as the tailor said to the broke and naked Knight, suit yourself." (p.86)

PickyReader thinks this title is suitable for 23 years and over

DanniOcean thinks this title is suitable for 14 years and over

Coarse Language: much inventive cussing - hilarious, but could be offensive to some

Author Christopher Moore could not have timed it better - just in time for the Stratford Festival season’s opening, his latest novel The Serpent of Venice mashes up three (or more) of Shakespeare’s most famous and gut-wrenching tragedies – into a most gut-busting hilarious chain of events. It takes a person with a great deal of hutzpah to take Othello, The Merchant of Venice and King Lear, puree them into one (fairly) believable story, make them funny, and give them all much happier endings (the villains come to some very sticky ends). But not only does Moore meld the plots, he also throws in elements from Edgar Allan Poe and not a small smattering of history in the Travels of Marco Polo. Plus there’s a wandering chorus, an amorous and homesick dragon, and a ghost - as Pocket, the title character would say, “There’s always a bloody ghost.” Now, to get the full picture, readers unfamiliar with Moore’s work may want to begin with the first novel to feature Pocket the jester, called Fool – which parodies King Lear in full (there’s a ghost in that one, too). However The Serpent of Venice is a romp for any Shakespeare fan who does not mind Moore’s habitual irreverence for his source material; in that way, he is somewhat like the Bard himself. That is not to say Moore did not do his homework – according to the author notes he was quite careful in his research and used historical events to bind the various plots together. In fact, his attention to detail makes his novels more than just cheeky fluff. However, the details to which he pays attention are those that lie between the lines, the details that may be overlooked in a casual reading of history and the Bard, the details that may make those readers of Shakespeare sit up and go, “well, THAT’S interesting…” By the way, Moore can out-bawdy the Bard, so be prepared for some truly lewd wordplay and inventive uses of the f-bomb. I would dearly love Moore’s novel adapted for the stage, but until an enterprising playwright decides to take that on, we can enjoy the narration of Euan Morton on the audiobook version as well. The Serpent of Venice currently sits at the top of my favourite books list of 2014. Enjoy!