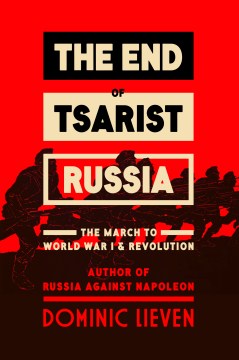 The End of Tsarist Russia

The March to World War I and Revolution

"'As much as anything, the First World War turned on the fate of Ukraine...' The decision to go to war in 1914 had catastrophic consequences for Russia. The result was revolution, civil war and famine in 1917-20, followed by decades of Communist rule. Dominic Lieven's powerful and original new book, based on exhaustive and unprecedented study in Russian and many other foreign archives, explains why this suicidal decision was made and explores the world of the men who made it, thereby consigning their entire class to death or exile and making their country the victim of a uniquely terrible political experiment under Lenin and Stalin. Epic in detail and scope, THE END OF TSARIST RUSSIA is a gripping study of why the Russian Revolution happened and why it had such fateful consequences for both Russia and Europe. THE END OF TSARIST RUSSIA is about far more than Russia. By looking at the origins and results of the First World War from a mostly Russian angle, it offers a radically different view of why Europe descended into disaster. Dominic Lieven's interpretation of Europe's great war and Russia's revolution will overturn assumptions about events that still have major implications for world history down to the present day"--Front flap.
Publisher: New York, New York :, Viking,, [2015]
ISBN: 9780670025589
0670025585

... key figures in Vienna had believe that Serbian nationalism was a threat to the monarchy, which only war could solve.

The assassination of Archduke Franz Ferdinand at Sarajevo came as a bolt from the blue.

..., that the German and Russian economies benefited hugely from each other and war between the two enemies was suicidal madness.

Armies exist to fight wars, but they spend most of their time at peace.

Woe be tide a great power deemed to be unwilling or unable to protect its vital interests by force.

International relations in the Age of Imperialism reflected the law of the jungle.

Russian policy in east Asia rested on the appearance rather than the reality of power in the region.

..., it is not surprising that hostility to Russia ran deep in Turkish hearts.

Had the Treaty of Brest-Litovsk survived, Germany would have won World War I.

..., World War I turned on the fate of Ukraine.

If you are looking for the book titled "Towards the Flame: Empire, War and the End of Tsarist Russia", this is the same book. It was published under different titles in the U.K. and the U.S.

For me, this book was like reading a PhD thesis/dissertation, though it really clarifies the mess Europe was in from 1905 onwards to the present day. It also presents an excellent presentation of the values and ethnicity of Eastern Europeans and Russians. An excellent follow-up book is The Long Shadow: the Legacies of the Great War in the 20th century by David Reynolds.

The great irony of World War I was that a conflict which began more than anything else as a struggle between the Germanic powers and Russia to dominate east-central Europe ended in the defeat of both sides.

The two world wars in Europe were more than anything else a struggle between Russia and Germany to control the Continent's center and east, thereby in principle making one or the other the dominant power in Europe.