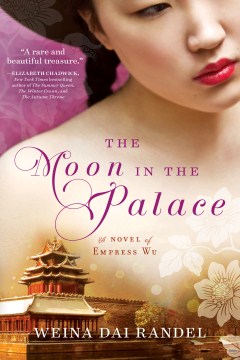 The Moon in the Palace

Baker & Taylor
In seventh-century China, concubine Mei wins the attention of the Emperor with her intelligence, but a dispute over loyalty in the court leads to a palace coup and Mei must use all of her alliances if she is to survive.

Baker
& Taylor
Summoned to the emperor's palace to serve as one of his concubines, Mei, who, after her father's death, needs to support her poverty-stricken family, finds herself in a position to seduce the emperor, but instead falls in love with his son and must fight to gain favor with the ruler of China while protecting the man she loves. Original.

A thrilling work of historical fiction, bringing romance, intrigue, and the unexpected rise of an Empress to intoxicating life under the inscrutable moon.

In Tang Dynasty China, a concubine at the palace learns quickly that there are many ways to capture the Emperor's attention. Many hope to lure in the One Above All with their beauty. Some present him with fantastic gifts, such as jade pendants and scrolls of calligraphy, while others rely on their knowledge of seduction to draw his interest.

Young Mei knows nothing of these womanly arts, yet she will give the Emperor a gift he can never forget. Mei's intelligence and curiosity, the same traits that make her an outcast among the other concubines, impress the Emperor. But just as she is in a position to seduce the most powerful man in China, divided loyalties split the palace in two, culminating in a perilous battle that Mei can only hope to survive.

In the breakthrough first volume in the Empress of Bright Moon duology, Weina Dai Randel paints a vibrant portrait of the Emperor's Palace—where love, ambition, and loyalty can spell life or death—and the woman who came to rule all of ancient China.

"I absolutely loved The Moon in the Palace... A rare and beautiful treasure."—Elizabeth Chadwick, NYT bestselling author

1st book of 2. Second book is The Empress of Bright Moon.

I really enjoyed this book. I was constantly thinking about the story whenever I had to set it down and do something else. I was on the edge of my seat wondering how Mei would make the journey from hapless concubine to Empress of ancient China. It's a mesmerizing novel!

Review excerpt: "The most intriguing aspect of this book is the interpersonal dynamics between the women and the elaborate political games in which they engage. In ancient China (and in many other places), external power belongs to the men. At the Emperor’s Court, a woman’s worth and power derives from the interest displayed by the Emperor as well as the success in bearing the Emperor male heirs. Because access to and the favor of the Emperor is a scarce resource, the relationships between the women are fraught with intrigue and power struggles. Mei learns this the hard way when she is betrayed by a woman whom she believed was a friend and almost mentor.

Throughout the book, she faces dilemmas about whom to trust and to align with. Making these choices becomes even more difficult when she develops a friendship with and later an attraction to a young man whom she learns is the Emperor’s son. As this book progresses, she learns from each mistake and further cements her own power base though the book ends before that power is fully realized. Thankfully, there’s another book in the series and I plan to read it. If you enjoy novels about relationships between women and women finding their own inner strength through those relationships, you will enjoy this book."

Hard to put down. This one evoked all sorts of emotions. Enjoy!

An enjoyable read for those interested in Chinese history with touch of romance, mystery and action.