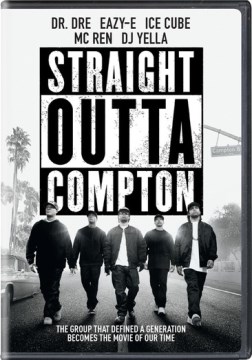 Alternative Title: Straight out of Compton

Before I watched this movie, I heard Easy E's song called "Cruising in My -64." Eric Wright (aka "Easy E") was the main reason why I watched this movie. I was wondering if it is possible to find a decent and honest music manager in California. In the movie, the group called N.W.A. became dissatisfied with the music agent named Heller. I think the other music agent from Death Row Records (Suge Knight) was a worse alternative. Didn't Suge have his people beat up "Easy E" because Suge wanted to sign "Easy E" to the Death Row Records label? ********In the mean time, I will check to see if the soundtrack for this movie is available for me to listen. Even though the music is laced with profanity and violence, it is raw lyrical poetry set to "dope" musical beats. In the movie, they mentioned the Rodney King beat down and how the four LAPD police officers were set free. N.W.A. dedicated a song the police.

I would classify this as a "justification film" providing an excuse for minority anger, disrespect for law enforcement, and anti-establishment types. You have to embrace gansta-rap in order to enjoy this period piece.

Straight Outta Compton is one of the best group biopics/period pieces I've ever seen. Production credits for Dr. Dre and Ice Cube, as well as having F. Gary Gray at the helm as director give this movie the depth, grit, and mainstream polish and appeal that audiences have come to expect from each of these artists.
The decision to cast O'Shea Jackson, Jr. as his father (Ice Cube) may have caused some overshadowing issues, but the rest of the cast play their parts admirably. Jackson's deep connection with his source gives his performance a lot of personal fire, which may have given him an unfair advantage over the other members of the ensemble.
At two and a half hours, this is a long movie, however the amount of material covered (as well as a raucous, rousing soundtrack) keeps it from dragging. It is at once the story of a budding musical genre (West Coast gangsta rap), the group that innovated said genre (N.W.A.), a sociological commentary about growing up black in the L.A. suburbs of the 1980s and 90s, and, finally, a gut-wrenchingly tragic love letter to Eazy-E, one of the founders of N.W.A., a flawed-but-talented hip-hop pioneer who died tragically in 1995.

Great movie about one of the best rap groups ever formed.

Although it was entertaining and a decent amount of it was true (with dramatization), I feel as if it dragged on far too long. This movie did not need to be two and a half hours. I did feel the emotion at times, especially at the end and the emotional family scene for Dre, I won't be specific and spoil anything for those that don't know! The best part of the film, by far, was the soundtrack. The music kept me in the zone, as well as exciting character introductions that we all knew were coming like Snoop Dogg and Tupac. Overall, decent but could have been a lot better.

I didn't think I would like this movie as I am not a big fan of gangsta rap. I am so glad I decided to watch it. It will give you a deeper understanding of the injustices that black Americans endure. I care more about this injustice after watching the film. There is also a hint of a dark prophecy here that Americans should not ignore. I love it when Ice Cube tells a journalist that he is just another kind of journalist; he also reports the truth in his music, sometimes harsh truths that people don't want to hear.

Great movie! Some things were left out but I assume to leave room for the next movie.

NWA is what happens when raw talent, passion, and vision come together. Straight Outta Compton is the inspiring story of five individuals who possessed those characteristics and rode a wave of success that has made them the music legends they are today.

I definitely appreciate this story being told, but as a movie it was a bit boring near the beginning. I nearly stopped watching about halfway in, but luckily I decided to keep going and then it got a lot better

Tons of quotes posted at imdb but not these yet. Hard to find quotes without excess profanity:
Cop: Sir, stay right there, please. We're trying to check these bangers, make sure they're clean.
Jerry: I'm sorry. These are not bangers. Okay? These are artists.
Cop: Excuse me? Artists?
Jerry: Yeah.
Cop: What kind of artists?
Jerry: Rappers. And they're working with me in the studio right now.
Cop: Well, see, rap is not an art. ... These clients of yours, these rappers, they look like gang members.
Jerry: You can't come down here and arrest people just because of what they look like. What, are you crazy? That's police harassment.
Cop: You said you're a manager, right?
Jerry: Yeah.
Cop: Not a fxxkin' lawyer.
Jerry: Does that matter? You cannot come down here and harass these guys... because they're black! People have rights!
Cop: Step back!
Jerry: I'll step back, you let them up. Get up, guys. Come on. Eric!
Cop: You don't tell them to get up. We will decide that.

Eazy-A: What they lock you up for?
Dre: I was literally just standing there, man. That's it.
===
Dad: Officer, can you explain why you jackin' us right now?
Cop: Man, I ain't explaining shxt to you. Get the fxxk up off the street.
Dad: I'm on my property. I can stand right here. You got that? Son! We right here!
Cop: Where you got the fxxkin' rocks, homeboy?
Ice Cube : Not everybody slangin' dope, man.
Cop: I don't give a fxxk! This is LAPD. I'm the only gangster out here.

The Rodney King Riot:
It looks kind of like we're in a war zone though. We've got some courageous shop owners here, who are armed. Anarchy is obviously a statement of political dissatisfaction. Police officers are still back down... guarding the area down there where the Ralph's... the police are using, eerily reminiscent...of military-style assault weapons. You can hear random gunshots as rioters... The cars have been left abandoned, because their drivers... We show you, and that police presence... We have fires burning. ... More than 100 injured, mostly in the South-Central
section of Los Angeles.

Reporter: Yeah, but your songs, they glamorize the lifestyle of gangs, guns, drugs.
Ice Cube: Our art is a reflection of our reality. What you see when you go outside your door? I know what I see. And it ain't glamorous. We get AKs from Russia and cocaine from Colombia. And ain't none of us got a passport, so... Yeah. Might wanna check the source. Next question.
Reporter: Will you be more careful about what you say, how you say it?
Ice Cube: No. Probably not, no. Freedom of speech includes rap music, right? Well, we exercising our first amendment as far as I'm concerned. And the government wrote that.
Reporter: So, Cube, what's a guy from Compton do when he starts making real money like this? Cube?
Ice Cube: Buy Raider gear. And curl activator. Next Question.

Tons of quotes posted at imdb but not these yet. Hard to find quotes without excess profanity:

Jerry: Now, what does N.W.A. stand for, huh? No Whites Allowed? Something like that?
Eazy-E: Nah. Niggaz With Attitude.
Jerry: I'll buy that.
===
1580 KDAY. ... This is Greg Mack of the Mack Attack. I gotta tell you, you are witnessing history. LA's first super group, N.W.A., with their new album Straight Outta Compton, and they're taking
the nation by storm.
===
Interview P1 of 2
Reporter: How do you explain inciting a riot in Detroit? What do you have to say about that?
Ice Cube: I have to say that, uh, we didn't incite that shit. Right. Y'all just got a snapshot of how Americans really feel. We gave the people a voice. We gave the people truth.

Frightening or Intense Scenes: Some of these scenes are intense and frightening for younger audiences.

Sexual Content: There are several scenes of female nudity and sex acts.

britprincess1ajax thinks this title is suitable for 16 years and over