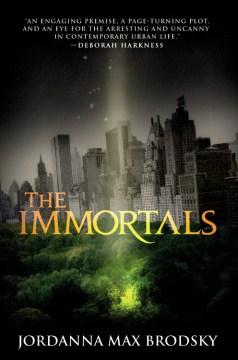 "A high quality contemporary fantasy novel that will appeal to a wide range of readers from American Gods to the kids who grew up reading Percy Jackson. The Relentless One, the Bearer of the Bow, the Untamed.....those are only a few of the names Selene DiSilva's answered to over the years. But these days she's content to work in secret, defending the women of Manhattan from the evils of men. She's reclusive, stubborn, and deeply unfriendly to everyone but her dog. But when a woman's mutilated body washes up in Riverside Park wearing a laurel wreath, Selene finds that she can no longer hide in the shadows. As more women are threatened, Selene is forced to embrace the one name she's tried hardest to forget -- Artemis. For who better to follow the killer's tangled trail than the Goddess of the Hunt herself?"-- Provided by publisher.
Publisher: New York :, Orbit,, 2016
ISBN: 9780316347181
0316347183
9780316306249

Follow Selene DiSilva, a.k.a. the Greek goddess Artemis, as she engages both mortal and immortal to reveal ancient mysteries and hunt down a killer in modern day New York. An enthralling, intelligent page-turner, this story will keep you guessing until the end. The character of professor Theo Schultz is reminiscent of the Robert Langdon character from Dan Brown’s “Angels & Demons”.

Long gone are the days when the Greek goddess Artemis, now Selene DiSilva, could hunt with impunity. Most humans no longer believe in her, or the other deities, modern society makes it difficult for her to stay undetected, her powers are greatly weakened, and her identity is in flux. Still, she holds true to her purpose as the Huntress, and protector of innocent women as best she can by punishing abusers.

Then something strange happens; a murder occurs, Selene starts getting stronger, and as she tries to avenge the woman killed, she becomes mixed up with Theo, a professor of the Classics, who is just as invested in solving this case. Chapters are usually told from the perspective of these two, and both are fascinating characters. Selene was a once powerful goddess that can now barely beat the men she once did with ease. As we get to know about her, we feel a great deal of empathy and even outrage, not only for her as a character, but for her as a symbol of the power of women, and what it means to have that taken away. Theo is just the right fit for her; conscientious, intelligent, caring, but not smothering. He grows in ways that he didn't expect, just like Selene does, and a lot of that is because of how their relationship develops.

Brodsky clears knows her Greek mythology and history, and, she knows how to write it into her story in a natural and easily digestible way. Those who love the Classics will find lots of references to thrill, while those with more of a passing knowledge won't find themselves in the dark. She also throws in some modern history from Manhattan. All of this was researched, and kept as accurate as possible. However the fantastical and historical elements are just two aspects of this book. It also is a mystery, romance, and thriller; deftly paced, and engaging from beginning to end.

Even with its trappings of gods and goddesses. The Immortals reads as a very "human" story. At its core it's about becoming a better version of oneself, accepting mortality, and building healthy relationships, rather than being trampled by toxic ones. By the end, Selene becomes an embodiment of the things she preached to all the women she saved, breaking free from a past best left behind, to move towards a future truly divine.

If you love mythology this is a good spin off story about some of the ancient "godly" characters., their story well woven into the modern times, played in Manhattan. She is writing her second book in the same topic, definitely will read that one as well, hopefully bringing more "ancients and their attitudes" into the new story. Give it a 4 star.

Well, if you loved the Percy Jackson series by Rick Riordan, I would be shocked if you didn’t absolutely love The Immortals. Percy was for our past, Selene is for our present.

Right from the beginning, Brodsky gives us a female character that we can root for. From her struggle to help protect the innocent, even though she’s barely stronger than a mortal, to the disheartened contemplation of the wrinkles she sees forming on her face, Selene feels immediately real.

Her ancient past is seamlessly woven in, and the mythology is easily explained for those reading who may not have any background familiarity with Greek myths. We’re introduced to the modern incarnations of some of the best – and worst – Greek gods, and in such a way that you have to give a nod to Brodsky for following the simple creed of Names Have Power. It was interesting to explore how that would play out with gods, whose power depended upon the strength of their worship.

The story itself is nothing unique. Dogooder seeks vengeance for the death of an innocent they are somehow tied to. The police (NYPD in this case) are inept. There’s a male / female partnership, so on and so forth. It’s to be expected. If you read for uniqueness anymore, you’d be perpetually dissatisfied with every book you laid eyes upon. The writing, however, is excellent. This was a book that I truly did not want to put down. Brodsky gave me a world that I can’t wait to be immersed in again. (So yes, I already can’t wait to get my hands on Olympus Bound #2.) The ending was completely unexpected. Selene proved herself immeasurably strong on a non-godlike level.

This was an enjoyable read that enabled you to shut off your brain and just enjoy the story. That’s the best kind.