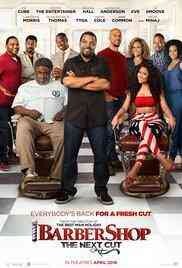 Alternative Title: Barber shop, the next cut
Next cut

Dear Chicago, the world knows you as the birthplace of the skyscraper, deep dish pizza, Don Cornelius, Kanye West, and the home of the Cubs, Bulls, and undisputed queen of daytime television, Oprah. And of course, yours truly. But to me, you're much more than that. You're the place that raised me, the place I call home. And I'll never forget what you gave me. My first kiss, with mean-ass Shonda Wilkins. My first fight... And first ass-whooping from Boobie Monroe. And of course, my first love, my wife, Jennifer, who gave me the greatest gift a man could ever ask for... My son, Jalen Palmer.
===
And I'm not the only one that feels this way, Chicago. We've just gone to a new low. When you now... There used to be a day when there was a code. You didn't kill children. You didn't kill mothers. You didn't kill grandmothers. There is no boundary. Children are dying in the street. We have to stop the violence. … The streets are talking. They're tired. They're angry.

We are college bound. We are exceptional. Not because we say it, but because we work hard at it.
===
You know what the whole problem with your generation is? You don't know how to do nothing, need to learn a skill. Learn how to mop a floor. You know what I'm saying? Iron. Your phone die, you wouldn't know how to spell a sentence. Smart phone, dumb girls! Learn how to cook a decent meal, for goodness' sake.
-Look, some of them don't even know how to microwave. Had a girl come over to my house last week, went into my kitchen, thought mine was a safe.
===
Wait. Wait. Hold up! You girls keep complaining about the chauvinistic talk in the shop, but y'all do the same thing in reverse. Each one of y'all want a super thug
that can hold his own on the yard at the Cook County jail, that's got three degrees from Harvard and making six figures. You know it. Meanwhile, you pass up corny dudes like Jerrod every day.

All I'm saying is, my parents moved here from India with nothing. They had no money, no friends. And their accents were so thick, they couldn't even get bank accounts. And somehow they made it happen.
-Not to dismiss your argument here, Raja, because it is... It is riveting. However, there were some "setbacks" that black people faced that really made things stressful for a minute there. Slavery being at the very top of that list.
-Exactly. Your ancestors were immigrants. Ours were imports. Big difference.
Not really. How do you think the West Indies happened, okay? They took Indians,
they took black people from Africa, they put 'em in the Caribbean, and 200 years later, Rihanna happened. You're welcome. I don't like white people either. Okay? I'm just saying, maybe y'all should stop making excuses and actually pick up the ball.

What are you talkin' about, man? You think it's a level playing field out here? You think racism don't exist no more?
-The President of the United States of America is black. The most powerful man on the planet is black.
Just one man.
-Meanwhile, only dude I have to look up to is the guy from Big Bang Theory.
He funny. He make me laugh. … So what does that mean for the average black dude walking down the street? Does our president's blackness, did it stop Trayvon Martin,
or Michael Brown, or Walter Scott, or Tamir Rice,or Freddie Gray from being killed?
Hell nah. A madman walked into a Charleston church and killed nine innocent people. Did his blackness stop that? Eric Garner got killed on tape and it still didn't matter. So what are you saying, Raja?
-I'm not sayin' that stuff isn't messed up. Because it is. What I'm saying is, there's never been a better time in this country to be a black person than right now.
Unless you Bill Cosby.

Look, I can't let y'all tear the President down like that. All right. The man is in an impossible situation. Know what I'm sayin'? … He's not just the president of black America. He's the President of the United States of America. And personally, I think he's doin' a great job.
===
Wow! Two black fathers bonding in the hood. It's rare. It's like catching a unicorn.
===
Look, Eddie, you once said that the barbershop is the pillar of the neighborhood.
-Damn right!
So we use that, right? We turn the shop into our safe space for the weekend. All right? Neutral grounds where both sides can come together peacefully.
-I like that. Yeah. Turn this place into Switzerland.
Exactly!
-Ain't no way in hell the South Side is ever going to resemble any parts of Switzerland. I don't even know no black Swiss. I mean, Swizz Beatz. Is he black? Or is he white? You know, he is a little beige. He might be Swiss. I mean... He named himself to it. So, he's Swiss. He's Swiss.

Last week, I got robbed twice and got my ass beat by the second robber for giving all my money to the first. She wasn't playing.
===
Look, I don't wanna take sides here, but does anybody else here see the hypocrisy in always blaming the single woman for the affair? I mean, let's be honest, she wasn't the one who swore to be honest and to be faithful and not cheat in the back room
of the barbershop until I'm dead. It was him. … Look, I'm just saying, hypothetically, okay? It is shameful society always blames the other woman when they should be blaming him.
-Listen, doofus... Monogamy doesn't run in our DNA. You understand that?
What?
-You can't defy science.
That is ridiculous, that is bullshit. Women want sex, too. And you don't see us lying and cheating, and going out buying sports cars. You're just a weak-ass man, Dante. Honestly, it's as simple as that.

I'm a real man. I don't feel like I need to cheat.
-Now that's just a lie. Because if Halle Berry came walking in right now and offered you them drawers, you trying to tell me you wouldn't take her in the back and just bed her down?
===
We black. It's hard. Hard and us go hand in hand. But we ain't never gave up.
-I didn't give up. I gave out. I'm tired, Eddie.
===
And I'm sorry about that Draya mess. Nothing happened. But I shouldn't have put you in that position.
-I know nothing happened. You're just an idiot.
I'm just a man, baby.
-I get it. And I know I've been working a lot. But I need you to know that I see everything you do. You're an amazing man, Rashad. You're an amazing father to Maya. I could never ask for a better partner than you. I guess I just figured you knew how I felt.
-I do. But sometimes a brother needs to hear it.

Y'all know I got love for the South Side. I got love for everybody in this neighborhood. I got love for everybody in here. All my customers even the ones that don't know how to go home. … after a while, it just... It just became easier to just walk away. Walk away from all this pain. All the hurt. That ain't right either. If we don't do something for this neighborhood, who will? At the end of the day we can't expect people who don't know nothing about what's going on around here, to come in here and solve our problems. We gotta fix our problems ourself.
===
I've been robbed, been shot, been stabbed. Hell, been stoned, been groped, and almost lynched twice. ... The only reason I'm still here is because the first time, they didn't know how to tie the knot. So I just slipped right out. And second time, the tree was too short.
===
What can the people of Chicago take away from this? It's a reminder that the individual, or, in this case, individuals, can make a big difference.

I have spent time in similar U.S. large city ghetto neighbourhoods. The barbershop/ hairdresser is the focal of these neighbourhoods. It reflected much of the cryptic humour. And, yes,the Obama election was a big deal. It helped to use the subtitles as some of accents were a bit different. These businesses are open long after other shops close for the day but often open later in the day. I liked it.

Really enjoyed this movie. Good storylines. Plus I love Ice Cube!!! Being in da hood raising a male child and all the obstacles that come it's inspiration of Hope. This message was profound for me.

this movie is a great surprise.. and very enjoyable.. hope is hope..

A must watch movie.

This totally unexpected follow up or sequel to this worn out it's welcome franchise is too LAME politically and socially.

A family comedy suitable for young teens and up. Broad social issues on gang violence, family, marriage, Obama, the other woman, father and son, friendship, politicians, community, immigrants and black Chicago, were all delivered with good sense of humor. Bravo to the writers and ensemble of actors. Critics: 5.9/10 IMDb, 92% Rotten Tomatoes and 3/4 RogerEbert.com.