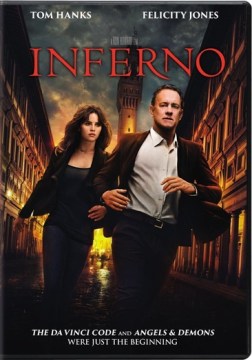 Love mysteries with clues that take you on a journey.

Directed by Ron Howard in 2016 based on the 2013 novel of the same name by Dan Brown, this American action-thriller depicts the struggle to disarm a viral superweapon dubbed "Inferno".
As the sequel to The Da Vinci Code (2006) and Angels & Demons (2009), this film focuses on the ill-contrived story with an unrealistic plot and gratuitously double-faced characters.
However, I enjoyed this fast-paced entertaining piece to the bare bone.

Was ok but not great

Not my favorite Robert Langdon story

Rated 6/10. A little above average. I found the plot a bit muddled and confused, although it became clearer toward the final 1/3 of the movie.

I returned inferno on time...fine unfair.....

Langdon is a famous symbologist who was following a trail of evidence until he woke up in a hospital without his memory. He teams up with a doctor who tries to recover his memories so that he may inform the world of a fatal virus that is soon being released by a psychopathic killer. This movie stars Tom Hanks and Felicity Jones, who sadly lacked chemistry making it hard to believe that their characters were as intimate as they were. The movie has some really exciting and creative scenes that will grab your attention, but for the most part, it is lackluster and slow-paced. I would rate this film 2/5 stars.
@The_Reviewer of the Hamilton Public Library Teen Review Board

Didn’t realize this was a Dan Brown book. Fortunately, the actors were able to fill you in on any plot twists by reading their lines like a book. You just have to run with it. And run with the cast. Lots of running and looking. Tedious thriller. Tom Hanks was too old to play the part he did. Great scenery.

Frightening or Intense Scenes: Some scenes may be too intense for youngsters - particularly those who pass out at the sight of blood.

The Ponte Vecchio from book P1 of P3:
Vasari Corridor was like a broad serpent, snaking through the buildings, all the way from the Pitti Palace, across the Arno, into the heart of old Florence. The narrow, whitewashed passageway seemed to stretch for eternity, occasionally turning briefly left or right to avoid an obstacle, but always moving east … across the Arno. The sudden sound of voices echoed ahead of them in the corridor, and Sienna skidded to a stop. Langdon halted, too, and immediately placed a calm hand on her shoulder, motioning to a nearby viewing portal. Tourists down below. Langdon and Sienna moved to the portal and peered out, seeing that they were currently perched above the Ponte Vecchio—the medieval stone bridge that serves as a pedestrian walkway into the old city. Below them, the day’s first tourists were enjoying the market that has been held on the bridge since the 1400s. Today the vendors are mostly goldsmiths and jewelers, but that has not always been the case.

The Ponte Vecchio from book P2 of P3:
Originally, the bridge had been home to Florence’s vast, open-air meat market, but the butchers were banished in 1593 after the rancid odor of spoiled meat had wafted up into the Vasari Corridor and assaulted the delicate nostrils of the grand duke. Down there on the bridge somewhere, Langdon recalled, was the precise spot where one of Florence’s most infamous crimes had been committed. In 1216, a young nobleman named Buondelmonte had rejected his family’s arranged marriage for the sake of his true love, and for that decision he was brutally killed on this very bridge. His death, long considered “Florence’s bloodiest murder,” was so named because it had triggered a rift between two powerful political factions—the Guelphs and Ghibellines —who had then waged war ruthlessly for centuries against each other.

The Ponte Vecchio from book P3 of P3:
Because the ensuing political feud had brought about Dante’s exile from Florence, the poet had bitterly immortalized the event in his Divine Comedy: O Buondelmonte, through another’s counsel, you fled your wedding pledge, and brought such evil! To this day, three separate plaques—each quoting a different line from Canto 16 of Dante’s Paradiso—could be found near the murder site. One of them was situated at the mouth of the Ponte Vecchio and ominously declared: BUT FLORENCE, IN HER FINAL PEACE, WAS FATED TO OFFER UP UNTO THAT MUTILATED STONE GUARDIAN UPON HER BRIDGE … A VICTIM. Langdon raised his eyes now from the bridge to the murky waters it spanned. Off to the east, the lone spire of the Palazzo Vecchio beckoned.

csrestall thinks this title is suitable for 14 years and over

King_of_the_Squirrels thinks this title is suitable for 16 years and over

Tom Hanks plays Professor Robert Langdon in the third film in this series, based off of the novel by Dan Brown. Robert Langdon wakes up in Florence with a head injury and no recollection of how he got there. It appears as if he is being hunted by the police/outside forces for reasons unknown. He teams up with a young doctor Sienna, and they attempt to unravel a series of clues from a projector which seem to point to a plague which is intended to curb population growth. Of course with a movie if this type there is a large twist close to the end.