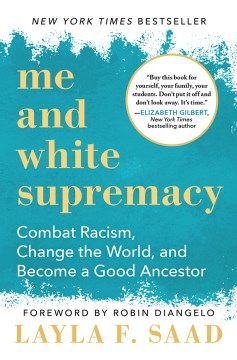 Me and White Supremacy

Combat Racism, Change the World, and Become A Good Ancestor

"Layla Saad is one of the most important and valuable teachers we have right now on the subject of white supremacy and racial injustice."—New York Times bestselling author Elizabeth Gilbert

Based on the viral Instagram challenge that captivated participants worldwide, Me and White Supremacy takes readers on a 28-day journey of how to dismantle the privilege within themselves so that they can stop (often unconsciously) inflicting damage on people of color, and in turn, help other white people do better, too.

When Layla Saad began an Instagram challenge called #meandwhitesupremacy, she never predicted it would spread as widely as it did. She encouraged people to own up and share their racist behaviors, big and small. She was looking for truth, and she got it. Thousands of people participated in the challenge, and nearly 100,000 people downloaded the Me and White Supremacy Workbook.

Updated and expanded from the original workbook, Me and White Supremacy,takes the work deeper by adding more historical and cultural contexts, sharing moving stories and anecdotes, and including expanded definitions, examples, and further resources.

Awareness leads to action, and action leads to change. The numbers show that readers are ready to do this work—let's give it to them.

Additional Praise for Me and White Supremacy:
"Allyship means taking action. How? Layla Saad's Me and White Supremacy teaches readers exactly how to get past the paralysis of white fragility so that they can build bridges, not walls. Read the book, look deep within yourself, sit with your discomfort, and then act. This is how we can truly say we are doing everything we can to combat white supremacy."—Sophia Bush, award-winning actress and activist

"She is no-joke changing the world and, for what it's worth, the way I live my life."—Anne Hathaway

"Layla Saad moves her readers from their heads into their hearts, and ultimately, into their practice. We won't end white supremacy through an intellectual understanding alone; we must put that understanding into action." —Robin DiAngelo, author of New York Times bestseller White Fragility

A 28 day workbook for people with white privilege to help dismantle the racist ideologies they carry.

Wow. One of the best antiracism books I've read. If you want to understand the true work and journey required to become an ally, this is an excellent guide. Didn't quite know what I was diving into with this book--definitely the razor edge scalpel of loving truth. It's set up as a 28-day workbook and I had checked out the audiobook. But, for me, listening to it in one go laid the ground work for me to now purchase the book and go more deeply through the thoughtful process she invites you to participate in.

This book was an important but difficult read and really challenged my self perceptions.

My first observation is that this is an amazing and insightful work that did help me move forward in my understanding of myself and others. I did my best to work through it with compassion for myself and others because working on myself is personally important to me. The author's message is delivered in a very direct way towards the reader. It is a workbook and you are expected to be doing the work on yourself.

As the author points out, this is not easy work. You get to decide who you will be in this world. Given the lack of comments I wonder...

I hope other white people will take the time to learn more about the social concept of race, how it can appear in white culture, and get insight into how it can unintentionally (or intentionally) hurt very decent BIPOC with whom we (are supposed to) share this planet.